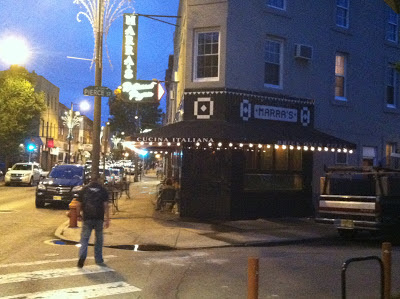 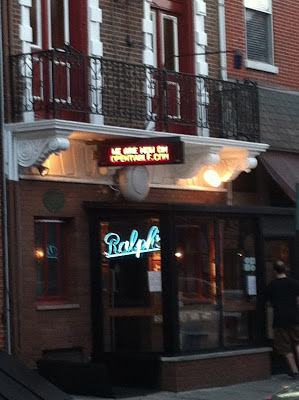 They are two classics.
Two mainstays of Italian food.
Some people call them "red sauce" places. Others think of them as neighborhood joints.
However you characterize them, if you're visiting legendary South Philly (the heart of Philadelphia's Italian community and the home of the streetside Italian Market) then you must come to Marra's or Ralph's or both.
We did both in one week.
Marra's on Passyunk (Ph'ledphians pronounce it Pash'unk) between 12th & 13th calls itself a "cucina Italiana." The place is shiny black subway tiles on the outside and dark wood and mirrors on the inside.  It's a cross between urban retro and Uncle Louie's basement, And Marra's ain't shy about noting that they serve pizza. It 'ya want it, they got it, hon. And they'll even stake their reputation on their crusty Italian pies.
Marra's has been around for 83 years and has welcomed its share of celebrities including Frank Sinatra, John Travolta, and Conan O'Brien. But while this restaurant isn't shy about selling its legacy, it's the food that keeps folks coming back.
We tried the veggie pizza and the spaghetti aioli olio (with garlic and oil). Both were superb.
Pizzas are available in three sizes: personal, small and extra large.
The large menu features all the pasta, veal, chicken and beef dishes you can imagine as well as classics and updated fare.
Ralph's, on 9th at the edge of the Italian Market just below South bills itself as the oldest family-owned Italian eatery in the country. It opened in 1900 and moved to its present location (an old boarding house) in 1915. Ralph's is owned and operated by the fourth generation of the Dispigno family.
Unlike Marras which takes up much of its block, Ralph's is more vertical. It occupies a three-story building next to the legendary Sarcone bakery (both Ralph's and Marra's serve Sarcone's bread).
You'll be very cozy inside Ralph's and you're likely to get to know your neighboring diners very well. A table for two will give you just enough room to maneuver.
We tried the green pastina soup, a house salad, the veal piccata with a side of red-sauce pasta and the sea bass. The soup was nothing less than extraordinary and the pasta was divine. The veal was a bit heavy on the buttery lemon sauce but the slices of veal were tender and succulent. The sea bass was deemed worth a second visit.
Ralph's boasts that it has hosted the likes of Frank Sinatra, Jimmy Durante, Lena Horne, Tony Bennett, Tom LaSorda, Joey Giardello, Rocky Marciano, Sergio Franci, Al Martino, Sammy Davis Jr., Michael Keaton, Heather Locklear, Dom DeLuise and countless others.
Service at both Ralph's and Marra's is brisk and no-nonsense. Study the menu, decide what you want and go for it. It shouldn't be necessary for you to ask too many questions since both menus are common-sense and fully explanatory.
People come to these places to soak up the neighborhood allure, dine with a cast of characters you won't find anywhere else (with lively chatter all about) and get down to the business of eating. The prices are moderate and there are absolutely no pretenses.
And both have won numerous "Best of Philly" honors from Philadelphia Magazine.
Ya know what we're talking 'bout, cuz? Deese are da real deal!