Elvis Presley died 36 years ago.
At the time of his death he was 42 years old.
So today, he'd be 78. What would he look like now?
Why speculate when through the magic of computers and photo manipulation we can virtually see what he would look like. Well, this is what Elvis would probably look like today without cosmetic surgery. But as a well-known performer you could pretty much bet that he would have had some nips and tucks here and there.
Anyway, let's just pretend he was like everybody else and had to age naturally. here's a photo of what he might look like now.
A place called Sachs Media came up with images depicting what various famous people would look like today. Click here for Rock and Roll Heaven to see other stars who died young and what they might look like now. 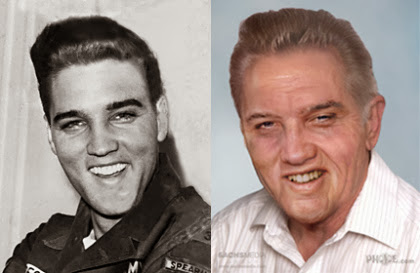 I don't agree , he would have dyed his hair , and like all good celebs, would have nice new white teeth.
You made him look super ugly, and I don think he would be.