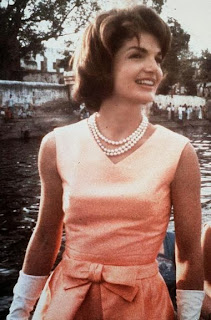 Maybe it was her love of legend and literature.
Maybe it was her fondness for image, surrounded by a touch of mystery and intrigue.
Or maybe it was just the fact that amidst all the fame, Jacqueline Kennedy remained a steadfastly private person.
Whatever it was, Jackie kept secrets.
But Kennedy family historian Philip Katz knows the secrets and is not particularly shy about telling others. Here are five of Jackie's secrets -- things that the public does not not ordinarily know about one of the most legendary first ladies in American history:

1) Jackie was old money. She was born into wealth and largely surrounded by society types. She was accustomed to having multiple homes and servants, traveling often and enjoying the finer things in life: yachts, jewels, estates and haute couture. Her family's pedigree far outpaced the Kennedy's.

2) Jacqueline Bouvier was a Republican. That's how she was raised and that was her party allegiance. Even after she married Jack, she retained Republican leanings. In fact, when Jack Kennedy was elected president she insisted that half the members of his cabinet be Republicans. And so, it came to be. Half of JFK's cabinet members were Republican.

3) Jackie could be as reckless in her personal life and her passions as JFK -- but in a different way. As an avid equestrian, water skier and world traveler, Jackie was not afraid to put herself in danger. During a time when women still held back, Jackie could be a brazen risk-taker. She didn't hesitate to water ski on one foot, or while holding a child. Some people were fooled by her soft, little-girl voice.  But she was not a genteel patrician. She could go toe to toe with the most passionate athlete.

4) Jackie raised her niece, Anna Christina (Tina) Radziwill , the daughter of socialite/actress Lee Bouvier Radziwill (Jackie's sister) and the late Stanislaw Radziwill. Jackie took Tina under her wing and literally made her part of her family.

5) Jacqueline Kennedy, one of the most-photographed women in the world, actually hated being photographed and could be painfully shy. Though she loved getting dressed up and going out on the town, she also treasured her private moments and loved nothing more than a quiet evening with a good book. During these moments, she would allow only one person to photograph her: John F. Kennedy.
Posted by Dan Cirucci at 11:49 AM