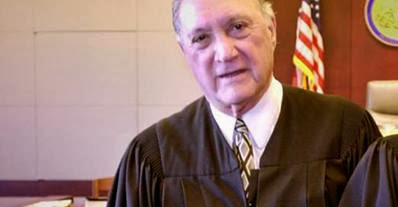 They have a term for it in  legal circles.
They call it Robeitis.
It's what happens to certain self-appointed Important People when they ascend to the bench. They put on the black robes of the judiciary and they suddenly become more than mere mortals. They start to believe they're actually worthy of all of the deferences bestowed upon them and the privileges they enjoy. They expect the seas to part for them.
Retired Philadelphia Common Pleas Court Judge Anthony DeFino never suffered from Robeitis.
Both on and off the bench, Judge DeFine simply was who he was. And above all, he was a Philadelphian. He was a "Hey, how 'ya doin?" kinda guy. His title and the trappings of public office did not change him. He was without pretense.
Whenever we ran into Judge DeFino (usually at events sponsored by Philadelphia's Justinian Society of Italian-American lawyers) the judge always had a smile. He was friendly, engaging and always helpful.
Judge DeFino, who died tragically last night in a fire at his home in South Philadelphia was a graduate of Temple University's Beasley School of Law and he presided over many significant trials during his  19 years on the bench. He also made a bit of Philadelphia judicial history when he and his daughter Rose Marie DeFino-Nastasi became the first father and daughter ever to serve simultaneously as judges in the city. She is the sixth of his eight children. Judge DeFino was a pillar of the South Philadelphia community and a proud Italian-American through-and-through.
We're also told that the judge was a mentor to many, many young lawyers -- that he was generous with his time and took delight in passing on his knowledge, expertise and wealth of experience to future generations. That tells us that he was secure -- immensely secure in himself and his accomplishments. For one cannot truly mentor unless one is secure. But that's the kind of man Judge DeFino was.
At 86, you might say that the judge lived a long and productive life. And he did. But this man was still active, still vital, still making a difference.
The Philadelphia legal community and so many others in the region mourn his passing along with his wife Rose, their children, grandchildren and great grandchildren.
Click here to read our friend Gina Furia Rubel's beautiful tribute to Judge DeFino.