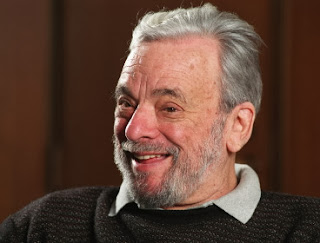 After five decades as Broadway's favorite composer and lyricist Stephen Sondheim continues to be the subject of books, films, videos, recordings and new interpretations of his music.
And though we sometimes wonder just how much Sondheim is too much, we never really tire of the man and his remarkable musical theatre legacy. Two recent Interpretations of Sondheim provided ample evidence of this and another is on the way.

The first was an updated, Brit-produced filmed version of Sondheim's 1981 musical Merrily We Roll Along, which was presented on 460 movie screens across the United States.

We had the opportunity to see this production and it was first-rate.
From London's Menier Chocolate Factory, it was filmed onstage in July at the Harold Pinter Theatre, at the end of its West End run. We marveled at how well it transferred to  film.
Even Sondheim has admitted that the  original production of Merrily was unworkable, with a visibly troubled tryout period followed by a quick opening and closing on Broadway.
Still, Merrily has been widely performed over the last 20+ years, although it has thus far not made it back to Broadway. We saw two of the intervening productions, one at the Arden Theater in Philadelphia and one at the Kennedy Center in the nation's capital.
But this was the best we've seen yet and for this reason: The characters in this production were not fresh-faced newcomers (a hallmark of the original) but accomplished, adult actors. This made the whole thing more mature and more meaningful.
Here's what Sondheim said about it: "This production of Merrily We Roll Along is not only the best I've seen but one of those rare instances where casting, direction and show come together in perfect combination, resulting in the classic ideal of the sum being greater than the parts."
Okay. That's Sondheim on Sondheim with reference to a traditional theatrical production.


But what about Sondheim interpreted by a master of jazz?
What about Sondheim through the eyes of the great Wynton Marsalis?
That's what we discovered recently at City Center New York's A Bed and A Chair, A New York Love Affair.
A Bed and A Chair reinterpreted Sondheim in a bluesy, jazzy, more relaxed style but with the full Jazz at Lincoln Center Orchestra. The cast included Broadway diva Bernadette Peters; the Great White Way's new golden boy, Jeremy Jordan; Norm Lewis and Cyrille Aimee along with accompanying dancers and original choreography.
Though we haven't agreed with them, critics have often charged that Sondheim's music is brittle and that his characters can often come across as detached and uncaring. Some people have interpreted Sondheim's brilliant wordplay as nothing more than smug and cynical syncopation. Be that as it may.
In Book and Chair, under Marsalis' direction the words and the music are sultry and seductive. What may have seemed cool before is suddenly hot, hot, hot.
This evolution was no small feat - especially when you consider that Marsalis has not compromised the essential integrity of Sondheim's work one iota. So, we get a lush, richer Sondheim without any unnecessary sentimentality. And none of it is dumbed-down. It's astonishing, and clearly the work of a master musicologist and deft arrangers.
But let's not forget Broadway's actors in song. All of them transitioned beautifully to this reinterpreted Sondheim. In particular, Bernadette Peters gave us the new, fresher, more nuanced The Ladies Who Lunch and this now becomes the definitive version. Ditto, her rendition of Broadway Baby. And Jeremy Jordan brings Sondheim to a whole new generation and also proves that he can sing (and croon) jazz and cabaret-style with the best of them. After his triumphs in Bonnie and Clyde and Newsies, Jordan steps up to the plate and goes toe-to-toe with Broadway royalty (both literally and figuratively in the case of Peters) and proves he's equal to the task.

Small wonder then that Jordan is also featured in the new HBO special Six By Sondheim upcoming on December 9.
Directed by Tony Award-winner and frequent Sondheim collaborator James Lapine, Six by Sondheim is a highly personal profile of a great American artist as revealed through the creation and performance of six of his iconic songs. Told primarily in Sondheim’s own words, this feature documentary weaves together dozens of interviews with the composer, rarely seen archival material spanning more than half a century (including newly discovered footage of Ethel Merman performing Gypsy) and re-stagings of three songs produced especially for the film.
For Jordan, the opportunity to perform Sondheim is summed up in the song he delivers in this new special: Opening Doors.

Though she's never appeared in an original production of a Sondheim musical, Broadway diva Patti LuPone has played the role of the iconic Mama Rose (lyrics by Sondheim) in Gypsy and she has also performed as Mrs. Lovett in the Sondheim masterpiece Sweeney Todd.
When we saw LuPone perform last week at Morgan's Cabaret atop the Prince Music Theater in Philadelphia she performed only one Sondheim number, the rapid-fire novelty song By The Sea from Sweeney Todd. For this inmate evening, LuPone chose a rather arcane selection of tunes all built around the theme Far Away Places, accompanied by conductor and pianist Joseph Thalken.
She started with the That Old Bilbao Moon (also known as the Bilbao song) from the 1929 Weill/Brecht German musical Happy End. Along the way she chose many strange and exotic spots for her musical journey including Nagasaki (Down in Nagasaki) and Austria after World War I (Just A Gigolo). We don't know whether or not LuPone was trying to channel Marlene Dietrich but she did appear in a full satin-adorned tuxedo with white tie and tales. The only thing she was missing was a top hat.
LuPone's voice is Very Big in a small cabaret setting like Morgan's but that merely serves to guarantee that you won't become bored or even begin to doze off. She treated her audience to more than a few patter songs delivered in a torqued, breathless fashion and since she's a proud product of  Julliard's Acting Company, she acted each song with precise accents, timing and elocution.
Trust us: There's no place to hide when Patti LuPone is up on stage. She makes intense eye contact with her audience and inhabits a song like no one else, especially when she delivers what she called the Sicilian national anthem -- I Wanna Be Around . . . To Pick Up The Pieces.
Yes, the comedy that she weaves into some of her numbers is sharp an unmuffled.
LuPone ended the evening as she began with another Kurt Weill tune, the haunting September Song.