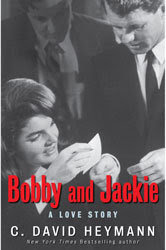 Not very long ago C. David Heymann'sBobby and Jackie, A Love Story.

This is sad and tragic story and we all know how it ends.
Indeed, those of us who lived through that era of American history know the story all too well. Or at least we thought we knew at the time.
But there was so much that we didn't know.
I suppose it was inevitable that Jackie Kennedy and Bobby Kennedy would be drawn closer and closer together after JFK's assassination. Each would not have made it without the other.
And no one should be surprised that their attachment became more than platonic.
But this book is about so much more than the untold story of Jackie and Bobby. It's also about the vast dysfunctional family of Kennedys.
At one point in the book, contrasting the family with Jackie herself, the author describes the Kennedys this way:
"The Kenedys were chintzy when it came to their personal lives. They never tipped. Their homes were always in need of repair. The interior of all of their houses looked liked the inside of a Howard Johnson's motel. Their household employees - gardeners, drivers, cooks and maids - were undocumented illegals, mostly from the Domenican Republic, and were paid the minimum hourly wage. Members of the family never carried cash with them. They charged everything and took months, sometimes years, to repay their debts. They went to Stop n Shop supermarkets in search of bargains. They spent generously on clothes but this had more to do with outward appearance - a necessary feature of the political arena - than it did with any intrinsic interest in fashion."
Posted by Dan Cirucci at 12:09 PM