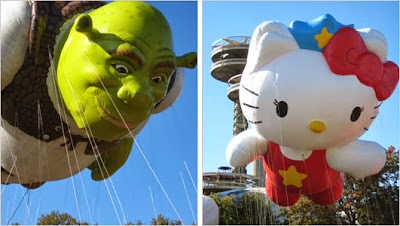 What's the Macy's parade without balloons?
We may be about to find out.
Impending bad weather may force the Macy's parade to forgo those great, huge character balloons that made it famous.
This year a nasty storm is headed into the Big Apple from the west. If it hugs the coast (as many expect) it could become perilous. Though the storm is due to hit tomorrow, the high winds may linger into Thanksgiving. If winds exceed 20 or 30 miles per hour, that could torpedo the balloons. They simply cannot be controlled with such winds and the situation could become dangerous.
Winds beyond a certain point could also deflate the balloons.
Weather did force Macy's to ditch the balloons in 1972.
Stay tuned for updates.