Why The Gettysburg Address Still Resonates 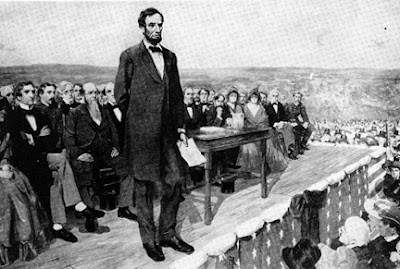 When we teach public speaking, Lincoln's Gettysburg Address is one of the first things we teach.
Why?
Because it contains all of the essential elements of a great speech:
1) It has a clear central theme -- a central idea: That it falls to the living to honor those who have died for freedom and to keep the promise of freedom alive now and nourish it for future generations.
2) It also has a clear purpose: To remind us of the sacrifice of others in the name of freedom and commit us to its perpetuation and the preservation of our nation's ideals.
3) The speech is simply organized with a beginning that makes a vital link with its audience (Four score and seven years ago, our fathers . . . ) a substantial mid section containing its core message and a strong conclusion (. . . that government of the people, by the people, for the people, shall not perish from the earth).
4) Finally, the speech is brief and to the point. It's remarkably efficient.

Contained within this speech is everything we need to know about public speaking: Understand your audience and appeal to that audience; know what you want to tell the audience and why you want to tell them this; make your message clear, simple and memorable; stick to the message; tell the audience what you want them to think, feel or do; end on a hopeful note.
And all of this is contained in a speech of less than 300 words.
Quite simply, it's a model speech.
But here's the incredible thing: The speech continues to have amazing relevance to the here and now.
Would we want anyone who fought for freedom on the battlefield to have died in vain, then or now?
Aren't there still warriors who are willing to make astonishing sacrifices for our country in the name of freedom and justice?
Don't we still believe in the core values so wonderfully expressed in the speech?
The speech remains a bulwark for all of us. It's as if the Liberty Bell suddenly pealed again and said: "Hey, wake up! This is why we were founded. This is why our nation is all about. Democracy needs you. Answer freedom's call -- or perish. Do it now!"
As many times as we read the Gettysburg Address, we are still inspired.
A great speech, written and delivered by the single most compelling figure in all of American history. This is why Lincoln stands head and shoulders above all the rest.