So, What The Hell Is Boxing Day, Anyway? Huh? 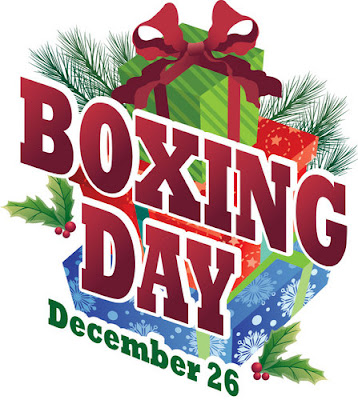 Today is Boxing Day in Great Britain and most of the Commonwealth nations.
The day after Christmas is customarily observed as a legal holiday.
No, the Brits do not all run out to boxing matches.
But they do enjoy soccer games today and they do lots of shopping today as well. The Queen and her entourage (such as they are) engage in fox hunting.
Where did the day get its name?
No one quite knows.
Many think it comes from the idea of boxing up Christmas stuff and/or sorting through your Christmas boxes (your gifts). But history says this is also the day when servants would get their Christmas gifts (cash and/or boxed treats) from their masters -- a sort of littler, humbler Christmas. Here's how it worked: Since they would have to wait on their masters on Christmas Day, the servants of the wealthy were allowed the next day to visit their families. The employers would give each servant a box to take home containing gifts and bonuses, and sometimes leftover food.
It was also a custom for tradesmen to collect "Christmas boxes" of money or presents on the first weekday after Christmas as thanks for good service throughout the year. In England Canada, New Zealand and Australia, Boxing Day is primarily known as a shopping holiday, much like the day after Thanksgiving in the United States. It is a time where shops have sales, often with dramatic price reductions. For many merchants, Boxing Day has become the day of the year with the greatest amount of returns. In the UK in 2009 it was estimated that up to 12 million shoppers appeared at the sales, a rise of almost 20% compared to 2008.
So, in the spirit of the day -- box, shop, spend, eat, dink and enjoy!
Posted by Dan Cirucci at 10:45 AM