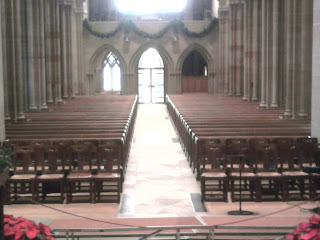 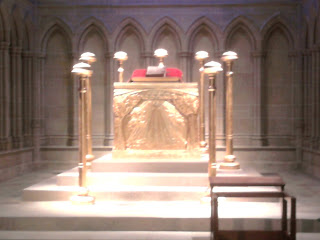 Have you ever visited the Bryn Athyn Cathedral.
We have. And we loved it!
The Bryn Athyn Cathedral is situated on a hill overlooking the picturesque Pennypack Creek Valley in the borough of Bryn Athyn, Pennsylvania (near Abington). Since its dedication in 1919, it has been the central place of worship for the Bryn Athyn Church and a gathering place for members of the New Churchthroughout the world. The Church is an incredible edifice and the surrounding grounds are beautiful through every season of the year.
The main construction of the Cathedral took place between the years 1913 and 1928 with work on the stained glass windows and interior decoration continuing into the early 1940s and beyond. The main Cathedral building is Gothic, while the northern and southern buildings are in the early Romanesque style. The symbolic plan is based on the teachings of the New Church.

The New Church says that it is "a new Christianity, [that] teaches that there is one God who we know as the Lord God Jesus Christ." The Church teaches that "God created the universe and everything in it with an ultimately loving purpose and that religion is to be lived, not just believed."
The New Church is based on the teachings of the Bible as illuminated by Emanuel Swedenborg, an eighteenth century theologian and scientist. Swedenborg provided an explanation of the Bible's internal meaning, as well as writing many additional volumes which the Church says "shed light on why we're here and how to develop a functional relationship with God. The teachings of the New Church, according to its followers "are immediately practical and deeply spiritual and provide answers to many questions about God, love and life after death that make sense."

During the 1890s the Philadelphia, Pennsylvania New Church Congregation and its associated school (the Academy of the New Church) made plans to relocate to the countryside. Huntingdon Valley, Pennsylvania was formally selected as the new location in the spring of 1893. Even before this date, a number of families belonging to the Philadelphia group had been spending their summers in the area.
Industrialist John Pitcairn (1841-1916), a congregation member, had purchased the Knight farm at the beginning of 1889, and Knight's Hill was used as the site of summer church services. Pitcairn eventually purchased enough land to accomodate both the school and a New Church community. In 1895, he built his own home, Cairnwood, nearby. During that same year he also provided funds to build a temporary frame structure in which the community could hold church services, school classes and social events.
Other temporary places of worship followed, and as the community grew, members of the congregation began to contribute to a church building fund. In 1908 John Pitcairn donated a large sum of money to the cause and five years later ground was broken for the Bryn Athyn Cathedral.
Today, the Bryn Athyn church and schools, together with the Academy of the New Church schools, have a growing and thriving church and local community that are blessed with a high quality, Christian values, school system.
Photos copyright 2011 by Dan Cirucci.
Posted by Dan Cirucci at 10:22 AM