President Trump, hosting the Public Safety Medal of Valor Awards Ceremony at the White House today, said he has directed Attorney General Jeff Sessions to draft regulations that would ban any devices that would turn legal, semi-automatic firearms into automatic weapons, after studying the issue of bump stocks from the Las Vegas shooting.

The regulations will be finalized “very soon,” he said.
The president has also announced his willingness to consider tightened background checks on those seeking to buy guns and new age limits on the purchase of certain kinds of guns. The White House notes that several new moves are now under consideration.
"We must to do more to protect our children," President Trump said. "We have to do more to protect our children.” 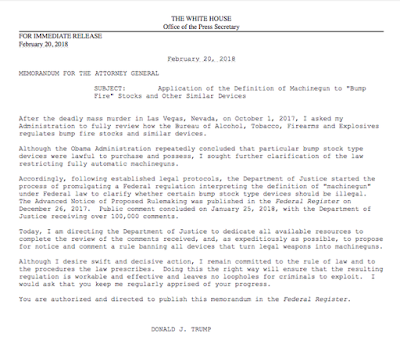