Grand Tour For A Definitive Collection Of Treasures! 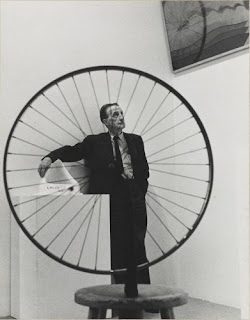 The Philadelphia Museum of Art is organizing the most comprehensive exhibition dedicated to the art and life of Marcel Duchamp ever to be seen in the Asia-Pacific region. From October 2 to December 9, 2018, The Essential Duchamp will be presented at Tokyo National Museum in Japan before traveling to the National Museum of Modern and Contemporary Art in Seoul, Korea, and the Art Gallery of New South Wales in Sydney, Australia. This exhibition will include about one hundred and fifty works and related documentary materials spanning the artist’s six-decade career. They will be drawn from the Philadelphia Museum of Art’s definitive collection of works by Duchamp, as well as its incomparable library and archival holdings relating to the artist. This major exhibition will offer a rich and engaging account of the fascinating life and influential work of one of the 20th century’s most original artistic figures. The opening of The Essential Duchamp in Tokyo will also mark the 50th anniversary of the artist’s death. The international tour is made possible by the Terra Foundation for American Art.

Timothy Rub, the Museum’s George D. Widener Director and CEO, notes: “The Philadelphia Museum of Art is uniquely suited to undertake this ambitious exhibition and delighted to share it with new audiences in East Asia and the Pacific. Since 1950, when Louise and Walter Arensberg donated their distinguished collection to the Museum, it has been a destination for those interested in Duchamp’s work and has become an important center for the study of his creative process. These holdings constitute a legacy that is central to our understanding of modern art. We hope to introduce audiences unfamiliar with Duchamp to his work and acquaint them with his complex modes of thought, his different personas, and the sustained effort he made to eliminate the boundary between art and life.”

The exhibition will include important early works that have never traveled to Japan, Korea, or Australia, including Portrait of Dr. Dumouchel (1910), Sonata (1911), and Chocolate Grinder (No. 2) (1914), along with many other key works, among them Nude Descending a Staircase (No. 2) (1912). This was the painting that made Duchamp’s name when it was exhibited at the epochal Armory Show in New York in 1913 and it will be seen in Korea and Australia for the first time in The Essential Duchamp.

The exhibition will offer a chronological account of Duchamp’s life and art. The first section explores the period from 1902 through 1912, when he experimented with different avant-garde styles ranging from Impressionism to Symbolism and Fauvism. It concludes with his highly original engagement with Cubism and his life-changing decision at the age of twenty-five to abandon the painter’s craft and seek new ways of working.

The second section examines the crucial interval between 1912 and 1917, when Duchamp pushed past the boundaries of painting as conventionally understood. It was during these years that he generated the ideas for his magnum opus, The Bride Stripped Bare by Her Bachelors, Even (also known as The Large Glass) (1915-23), and then embarked upon its construction after moving to New York. At the same time, Duchamp also created the first of his so-called readymades. Functional objects, such as his infamous sculpture Fountain (1917), were divorced from their utilitarian purpose and designated—as opposed to made—by Duchamp as works of art.

The third section follows Duchamp in Paris during the decades of the 1920s and 1930s, then back to New York as an émigré during World War II. Early in this period, he resolved to shift his vocation from art to chess, and went on to pursue chess with the commitment of a professional. At the same time, Duchamp invented a female persona named Rrose Sélavy and used this identity to pursue new projects. Some of those works were experiments in word-play such as puns and verbal games. Others were mechanical contraptions based upon his long study of the principles of perspective and optics. These activities dovetailed in Anemic Cinema, the short avant-garde film Duchamp produced in 1926 with the assistance of his frequent accomplice, the Philadelphia-born photographer Man Ray. By the mid-1930s, Duchamp became interested in the idea of revisiting his earlier and more recent works in the form of reproductions, resulting in the portable museum of miniatures entitled From or by Marcel Duchamp or Rrose Sélavy (also known as Box in a Valise) (1935–41).

Matthew Affron, the Muriel and Philip Berman Curator of Modern Art and curator of this exhibition, stated: “Duchamp once slyly remarked that the Nude Descending a Staircase (No. 2) had in some ways overtaken his story, leaving him ‘only a shadowy figure behind the reality of that painting.’ In fact, Duchamp preferred to glide in relative silence through the artistic avant-garde, even as he profoundly changed the way in which we think about the creation and interpretation of art. His persona was deliberately cloaked in an aura of mystery.”

Publication
The exhibition will be accompanied by a richly illustrated book of the same title, published by the Philadelphia Museum of Art in association with Yale University Press (29.95; flexibound, 232 p.). It is designed as an accessible introduction to the subject. Its four narrative sections by Matthew Affron follow the chronology of Duchamp’s art and life. Texts by Cécile Debray, Alexander Kauffman, Michael R. Taylor, and John Vick focus on four verbal expressions of Duchamp’s invention that are critical to comprehending his innovative ideas: infrathin, precision optics, readymade, and pictorial nominalism. The final section comprises reprints of four interviews and talks by Duchamp that account for his art and ideas in his own words. It will be available for purchase in the Museum Store or online at philamuseum.org.

About the Duchamp Collection at the Philadelphia Museum of Art
The Museum contains more than 200 paintings, sculptures, prints, and works in other mediums by Marcel Duchamp (1887–1968). The core of these holdings came as part of the important bequest of Walter and Louise Arensberg; Duchamp had served as the couple’s advisor and helped guide their decision to leave their collection to the Museum in 1950. Soon after, the Museum also received The Large Glass as a bequest from another important collector, Katherine S. Dreier. Étant donnésentered the collection following Duchamp’s death in 1968 and has occupied its own dedicated space since 1969, according to his wishes.

In addition to works of art by Duchamp, the Philadelphia Museum of Art’s collections of archival and reference resources related to Duchamp are the most extensive anywhere. They include personal papers, photographs, and preparatory materials compiled by the artist’s widow, Alexina (Teeny) Duchamp, as well as a variety of rare and unique research materials relating to the artist’s life, work, and legacy, collected by Philadelphia Museum of Art staff. The Arensberg Archive further complements these holdings, with records related to the couple’s collection, correspondence, and entire personal library documenting their interactions with artists and intellectuals in Duchamp’s circle. In total, the Museum’s library and archive hold more than 42,500 documents related to Duchamp.

Support
The Essential Duchamp was organized by the Philadelphia Museum of Art.The international tour has been made possible by the Terra Foundation for American Art.
Posted by Dan Cirucci at 9:55 AM