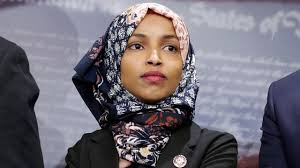 From a facebook friend of ours, Cantor Scott Borsky:

Just this morning Nancy Pelosi told reporters she is not asking Ilhan Omar to apologize for antisemitic remarks, saying that Omar didn't understand the "full weight" of her words. Pelosi also said it was her idea to include other forms of hate and not to mention Ilhan Omar specifically.

Was there ANY doubt that Pelosi would never, ever kick Omar off her committee? Not to me. Not only that, but Omar doesn’t even need to apologize.

So now Omar, and the other anti-Semites in Congress, can just say they didn’t understand they were being anti-Semitic and get a free pass? Or in this case, multiple free passes.

If Ilhan Omar can't comprehend, "the weight of her words" why did Pelosi appoint her to the coveted Foreign Policy Committee? Well, that’s an easy answer.

I don’t believe Omar doesn’t understand. Of course she does. She's not stupid--she's not a child--she's a 37 year old recipient of American goodwill who CHOOSES to twist American support of Israel and Jews into her personal pro-BDS campaign of bigotry and hatred while hiding behind her culture and religion.

So now, my friends, we clearly have the leadership of the Democratic Party fully supporting and condoning anti-semitism. It’s crystal clear.
Posted by Dan Cirucci at 2:33 PM