Of Witches, Investigations And Mindless Hunts . . . 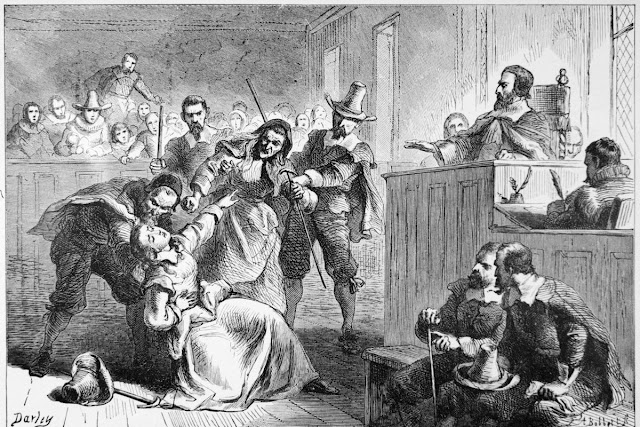 I was lunching with my friend Judge Richard Hyland when he brought up the term witch hunt.
"How do you interpret it? What does it mean to you?" he asked.
Well, whenever I'm questioned by a judge (even a retired judge) I weigh my answer quite carefully.
"I think it means a fruitless hunt," I replied. "It seems like a hunt that's looking for something that doesn't exist."
"You mean like a witch?" he said.
"Well, maybe," I replied.
Dick Hyland suggested the phrase may have come from our history -- from the Salem witch trials and similar events. And, of course he was right.
But witch hunts have an even longer history than that. In fact, the search for and punishment of those suspected of sorcery goes all the was to the 18th century BC and the Code of Hammurabi.
In the modern era, witch hunts reached a sort of zenith in North America when about eighty people throughout England's Massachusetts Bay Colony were accused of practicing witchcraft; thirteen women and two men were executed in a witch-hunt that occurred throughout New England and lasted from 1645–1663. The Salem witch trials followed in 1692–93.
Over the years, witch hunt has come to have a broader meaning, describing a campaign directed against a person or group holding unorthodox or unpopular views -- an irrational purge often provoking moral panic or even mass hysteria. More recently, many associate the term with the McCarthy years in the 1950s when innocent people were maligned and blacklisted in a sort of mass expurgation triggered by a fear of communist influence in our government.
Bingo!
Now you can see that what got us talking about witch hunts was the ongoing Mueller probe of the Trump administration searching for suspected Russian collusion. And many have called this seemingly unending investigation a witch hunt.
Indeed, there has been no evidence of collusion produced thus far -- none.
Is it then any wonder that, according to a recent USA Today/Suffolk University poll 50 percent of Americans now agree that President Trump is the victim of a witch hunt? Fifty percent! And barely more than a quarter (28 percent) say they have a lot of trust in the Mueller investigation.
More Americans than ever think it's a witch hunt!
They see it as a sort of irrational search for a demon that doesn't exist -- something dangerous and potentially harmful to our whole concept of justice which rests on the cornerstone of "innocent until proven guilty." Indeed history has shown that such reckless expeditions can create needless panic and even hysteria.
Of course, there's no such thing as witches, right?
Why then do we have a supposedly responsible official and a whole government agency searching for them?
Posted by Dan Cirucci at 5:15 PM

I have been casting spells for many years and I have helped many people, I might be able to help you too. I am honest, and I genuinely care for all the clients who choose me to cast a spell for them.
If you have any questions about Love, Money, curse, protection, bad luck, divorce, court cases, or about me please call or email me. I really want you to feel comfortable before moving forward with any spells, or other services. I will take the time to explain things to you and provide you with honest advice, to what is best for your situation. I will not pressure you into having a spell cast, I will leave that decision up to you, and when or if you decide to move forward, I might be able to help you.
I will respect your Privacy. I will not seek to obtain any of your personal information beyond what you might voluntarily offer and all information you might give me including emails, phone numbers and photos will remain private and confidential.
I perform my Rituals only at night between the hours of 0.00 - 0.59 (South African time) lasting 1 hour but of course, this depends on the nature of the ritual, some rituals might take hours and can also become necessary to be performed at specials places like; flowing streams, cemeteries and other places dictated by the gods.
I do not want anyone to be under any illusions about my spells and its numerous rituals. Real and effective Voodoo is no child's play, it is expensive because, after the rituals, I will have to destroy all the materials involved by fire and the ashes scattered over a flowing stream or river.
You will get what you seek.But please understand this might take a lot of time and that individual results may vary. contact +27663492930, greatogudugu@gmail.com

Herbal cure for Following DISEASES,this is not scam is 100% Real.