No fear!
It's a very powerful message.
And it's a theme that runs throughout Chris Christie's compelling new bestseller, Let Me Finish.
Christie says this mantra is something he picked up from his mother, Sandy but even moreso from his Italian grandmother, affectionally known as Nani. Here's how Christie explains it:
Nani wasn't scared of anything. One of the most important things she taught me was never to be afraid. "Fear is your enemy, Christopher -- not your friend," Nani always told me, and she was living proof.
At key points throughout his life Christie says these words came back to him. And, in the face of various threats and challenges, he says he moved forward without fear.
But psychology teaches us that fear is a natural emotion and a survival mechanism. We're also told that what's known as the "flight or fight" response (in which we must make a quick decision to run away from or confront whatever threat we're facing) is an automatic, biochemical response that is crucial to our survival. It's even thought to be anthropological. 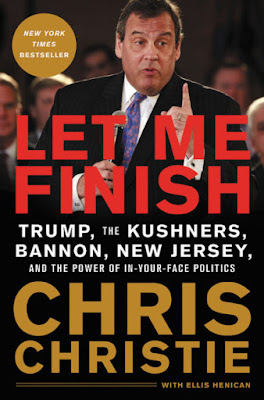 Psychologists even accept fear as something that is hard wired into our brains and most would tell you that feeling fear is neither abnormal nor a sign of weakness.
But what about obvious thrill seekers who seem to have no fear -- people like the late Evel Knievel, Harry Houdini and others? They actually deliberately put themselves at risk again and again and seemed to be fearless while doing it.
Well, those who have studied the human brain argue that a complete lack of fear could actually be a sign of serious brain damage. We know, for example, that teenagers sometimes exhibit a senseless lack of fear because their brains are still not fully developed.
So, what is this "no fear" stuff really all about?
Well, we suspect that it has much to do with the difference between having fear and showing fear.
If you show fear under certain circumstances or in reaction to certain people or certain events, you may be perceived as weak and you may exacerbate that situation or play directly into that person's hands.
It doesn't necessarily mean you're not afraid.
It simply means you are not signaling in any way that you're afraid.
This requires discipline, control and, if need be, a steely resolve. But not only must you not show fear but you must not show that you are suppressing the fear. In other words, you have to make your lack of showing fear seem perfectly natural.
Let's face it, we do not like our leaders to show fear because we know that showing fear in the face of a critical situation can be contagious -- it can trigger mass panic. We want our leaders to appear calm and steady in the face of danger.
We also want them to seem fearless in their dealings with those who might intimidate or threaten them or us. In this sense, our leaders act as a sort of guardian against would be antagonists or oppressors. If that means that those who would bully us must be met with a bit of bravado, then so be it.
Well, no one ever accused Chris Christie (or Donald Trump, for that matter) of not using bravado to ward off danger or subdue bullies.
And, after all, it was FDR, one of the greatest leaders of the 20th century, who rallied a nation in its darkest hour by declaring: "The only thing we have to fear is fear itself." But here, it's worth remembering Roosevelt's entire quote, because it tells us much about the nature of fear and its relationship to decisive action, or lack thereof. Here it is;


So, first of all, let me assert my firm belief that the only thing we have to fear is fear itself—nameless, unreasoning, unjustified terror which paralyzes needed efforts to convert retreat into advance.

And this leads to another pillar of Christie's approach to things as expressed in Let Me Finish.
In what could be a handbook on leadership, Christie maintains that, in key moments, the failure to decide -- and decide firmly and without hesitation -- is the road to ruin. When you hesitate or equivocate or vacillate, you show weakness. Here, a quote from none other than Rosa Parks comes to mind. Here's what she said:


I have learned over the years that when one’s mind is made up, this diminishes fear; knowing what must be done does away with fear.

OK, so maybe decisiveness (with a dash of daring) doesn't exactly do away with fear, but it certainly pushes it aside at just the right moment. And, that's the whole point, isn't it?
Posted by Dan Cirucci at 12:24 PM