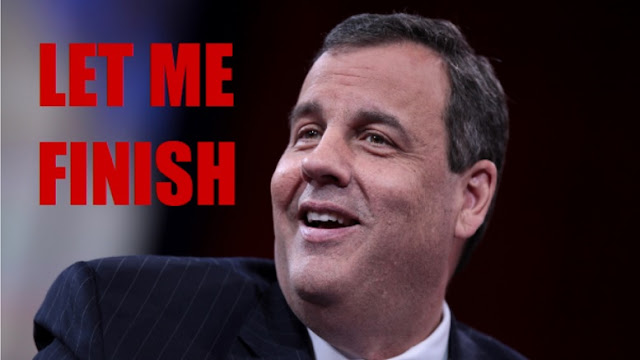 Governor Chris Christie's Let Me Finish is one of the best political memoirs I've ever read.
And I've read a lot of them.
The book is a lively page-turner that will keep you up late and make you wonder why others have not been able to combine real-life, teachable moments and insightful political analysis in the same way Christie has.
One of the best things about the book is that it's told in Chris Christie's own inimitable voice. Indeed, it's pure Christie from beginning to end -- frank, conversational, engaging and devoid of duplicity or pretense. And The Guv is often as hard on himself as he is on others as his looks back on critical moments in his life and honestly reviews his own words and actions.
No, there are no regrets expressed here. Christie's not one to wallow in the goo of coulda, shoulda, woulda. But there is sincere self-examination, the likes of which we rarely encounter in a book such as this.
The title of the book is largely derived from Christie's experience as the chair of Donald Trump's transition team. The story both begins and ends with Christie's inability to finish his job as chair of the transition, a post that was yanked away from him.
It seems that as long as Trump's election appeared unlikely, nobody apparently cared very much what Chris Christie and his staff of more than 100 volunteers were doing about the transition. Of course, Christie cared. He and his team took the job seriously and prepared an exhaustive, detailed plan for the orderly transition of power from Obama to Trump. And once Trump was elected the plan was ready to be enacted. Yet that's precisely when others in the Trump campaign decided Chris Christie could no longer hold this pivotal position. He was then replaced as chair by Vice President-Elect Mike Pence and became one of six vice chairs of the transition team.
Who was behind the coupe that removed Christie? The Guv lays the blame mostly of Jared Kushner, Reince Priebus and Steve Bannon. Interestingly enough, Bannon and Priebus were later banished in relatively short order. Only Kushner remains in the administration.
And, yes -- Christie has plenty to say about Jared Kushner and various members of the Kushner family. After all, it was then US Attorney Christie who prosecuted Kushner's father and sent him to jail. But you'll have to read the book for that entire story and its lingering repercussions.
This book is so much more that a political read.
It's a far more substantive and instructive human story of a Jersey kid who was taught to follow his dreams fearlessly and relentlessly.
It's the story of the people who helped mold the young Christie -- who inspired him and guided him and urged him onward. Christie not only talks about his parents, grandparents and siblings but he also discusses the early years of his marriage to Mary Pat (Foster) Christie, their struggles and the journeys they made separately and together as parents and successful professionals.
You'll learn about Christie's childhood friends; his lifelong passion for baseball; his college years at the University of Delaware and Seton Hall; his foray into politics and his two early losses; the defining implications of his mother's terminal illness and death; his entry into national politics via the George W. Bush campaign; his appointment and tenure as US attorney; and his tumultuous and hugely consequential time as Governor of New Jersey.
You'll also discover the story behind Christie's close relationship with certain key New Jersey Democrats such as George Norcross and Steve Sweeney; his obesity and lap band surgery; why Christie decided not to seek the presidency in 2012; how Bridgegate really impacted him both politically and personally and how Christie's longtime friendship with Donald Trump continues to play out. In fact, this book will give you a peek into the world of Donald Trump -- inside the Trump White House, Mar-a-Lago and Trump Tower -- that you won't find anywhere else.
But you've got to read the book to discover all this and more -- including the multiple meaning of the title and why there's much unfinished business behind Let Me Finish.
Okay, I will leave you with one juicy tidbit from the book. It's the story of Chris Christie in Donald Trump's office in New York as Trump first discusses the transition team assignment with him.
Trump doesn't want to talk too much about the possibility of becoming president because it would be "bad karma". So, he's willing to leave pretty much the whole thing to Christie.
But then Jared Kushner comes into the office, sits down, and in front of Christie lays out the case as to why Christie should not chair the transition team. And of course Jared brings up the bad blood between Christie and the Kushners. He does it all right there -- right in front of Christie and Trump. And Christie lets Jared go on. He just sits there and takes it all in.
Feeling that it's "all too surreal" Christie then turns to Jared and says that "You and I are both burdened with things that are difficult for the other person to understand." Christie tries to explain that he cannot possibly understand the depth of Jared's love for his dad "because he's not my father." And Jared, he says cannot understand "the facts about your father that even you don't know, that I can never tell you, because if I did I would break the law."
The room turns quiet.
And then, Donald Trump breaks the silence: "I've made my decision . . . Chris is the chairman of the transition."
"Fine," Jared replies. "I understand."
But, of course, that was hardly the end of the story.
Posted by Dan Cirucci at 8:22 PM