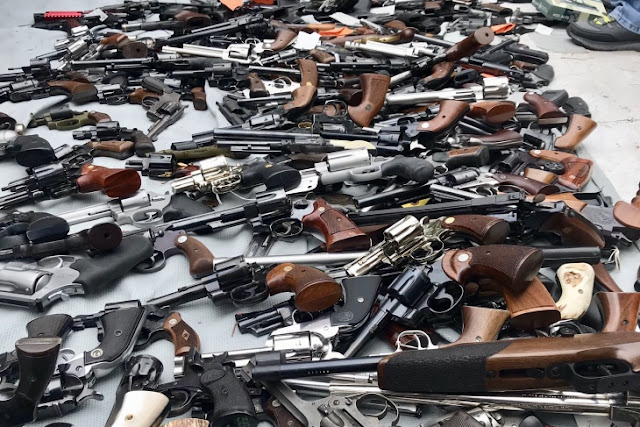 The events of the last few days have been horrific.

But some good can come out of all this.
IF our so-called "leaders" in Washington can agree, there are sound steps that can be taken.

Here are some measures we've suggested before:
1) The assault weapons ban should probably be re-eneacted. There's no guarantee it will stem the tide of violence but there's no reason not to put it back into effect, either.
2) Background checks must be toughened.
3) Much tighter controls need to be put on gun ownership by persons with mental disorders. In the case of unstable or questionable persons who already possess guns, the idea of a gun ownership restraining order seems to have merit.
4) Hollywood and the popular culture and the media must be held accountable. The glorification of violence must be halted. This ain't no movie and it ain't no video game. This is serious now, understand?
5) The crisis of boys with absent fathers must be addressed. It's nothing less than a time bomb.
6) Social media must come to the table. They share some of the responsibility for this.
7) Respect must be restored for the sanctity of human life and that means that we must have the courage to address the abomination that is abortion on demand. Remember: in the end, everything is related to everything else.

Well, it seems we're in good company on all this because our friend Stu Bykofsky has made similar suggestions at his new blog, which we commend to you. Here are Stu's suggestions as excerpted from his fine column:
1- Instant background checks for every buyer of every firearm, including gun shows. In 2017, Pew Research reported 85% of Americans approved background checks — 88% of Democrats and 79% of Republicans.
2- Deny guns to mental patients and those accused of spousal abuse. Rights could be restored after successful treatment.
3- Deny guns to those on a terrorist watch list. If you can’t get on a plane, you can’t have a gun.
4- Age 21 to buy a rifle. Federal law already makes 21 the minimum age for a handgun.
5- One gun purchase a month. This is designed to slow the straw buyer.
6- Restrict magazines to holding only 10 bullets.
H/T: Stu Bykofsky
Posted by Dan Cirucci at 2:04 PM