Those Glorious, Unheralded Joys Of August! 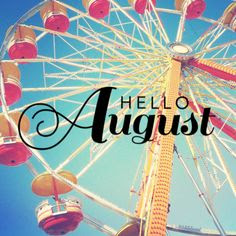 August is sort of the forgotten month.Stuck somewhere between the 4th of July (everyone's favorite summer holiday) and the nondescript Labor Day, August often gets lost in the shuffle.It's the month that the year barely recognizes.If you haven't taken your vacation by the middle of August (bout now) you may almost be out of luck since many people have already booked the last two weeks of August in the hopes of squeezing all they can out of summer's last full month. If you're working every day in August, (especially in the city) things may seem quite lonely and even barrenAnd August is also a long month with some of the hottest weather imaginable, which can make August afternoons seem interminably long, even while summer appears to fly by in a wink. Poor August. It has no real identity and apparently nothing to distinguish it.


But August is a wonderful month -- a month that simply does not get enough attention and is wrongly unheralded.

1) The month has no holidays -- no special days that you need worry about. So, in August every day is special and every day belongs to you. And that's particularly true for today which is a VERY special ay for me!

2) Lazy, hazy, crazy days of summer. August invites you to linger. Indeed, the summer heat of August compels you to linger. Stretch out, gaze, daydream - do whatever you want!

3) Fresh sweet corn, tomatoes and peaches. All are at their peak in August and all are wonderful!

4) Julius Caesar. The great Roman emperor extended our summer by adding two days to August in 753 BC. Now, August has 31 wonderful days!

5) The Perseids, a spectacular meteor shower which lights up the August sky peaked earlier this week. During the peak, the rate of meteors reaches 60 or more per hour. They can be seen all across the sky in the northern hemisphere.

6) The ocean water temperature which warms in August and becomes about as inviting as it's gonna be all summer. At the Jersey shore right now it's in the 70s! Wonderful!

7) Go Topless Day on August 25th. What? You didn't know about this? It's about as frivolous a commemoration as you can imagine. And don't forget the Philly Naked Bike Ride on August 24th!

8) The fearless lion and the sun. Most August birthdays are blessed to be part of the most regal sign of the zodiac, Leo. Those born under Leo take the Lion as their mascot and rule as natural born leaders. Their planet is the sun.

9) Red, yellow and orange. The incadescent colors of August. Check out all the fresh produce!

10) Augustus, the founder of the Roman empire who ruled from 27 BC until his death in 14 AD. The reign of Augustus initiated an era of peace known as Pax Romana. Were it not for Augustus, August would still be known as Sextilis, it's original name. Hey, we told you this was a sexy month. Enjoy!
Posted by Dan Cirucci at 11:38 AM