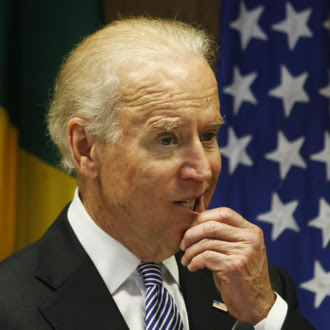 Joe Biden is now so obviously reconstructed and heavily dotted with makeup and the vestiges of old hair plugs that he looks like the guy you always went out of your way to avoid -- your friendly neighborhood  undertaker.
He mumbles and stumbles along,  bungling like an old vaudevillian who doesn't realize that the curtain came down on his cheap and tawdry act years ago.
He totally flubbed his response to our nation's current twin horrors citing murders in "Ohio and Michigan" and then he went on to compare President Trump to the Ku Klux Klan.
Imagine the total folly and phoniness of this! Does Biden have no sense of history whatsoever?
It was his beloved party, the Democrats who embraced and helped to embolden the KKK for decades. And it was people like Biden who, as a senator revered and praised former Klan leader, Senator Robert Byrd of West Virginia. In fact, Biden said Byrd actually "elevated the Senate." Of course, Biden is the same  guy  who recently boasted of working with racist segregationists while serving as a senator.
But now Biden would presume to lecture us on morality, tolerance and racial equality.
When President Trump today challenged the nation and its leaders to try to "speak with one voice" as we seek solutions and try to move away from the rancor and violence that has plagued us, Biden told  the president: "We won't truly speak with one voice against hatred until your voice is no longer in the White House." Did Biden think he was clever by tweeting this? Is that what he was aiming for during this crisis -- cleverness? Well, so much for working together, huh?
Joe Biden has become a sort of weary, tattered little two-reel drama in and of himself. He's like a very bad vintage black and white newsreel that sputters and crackles and groans on and on.
Posted by Dan Cirucci at 8:23 PM