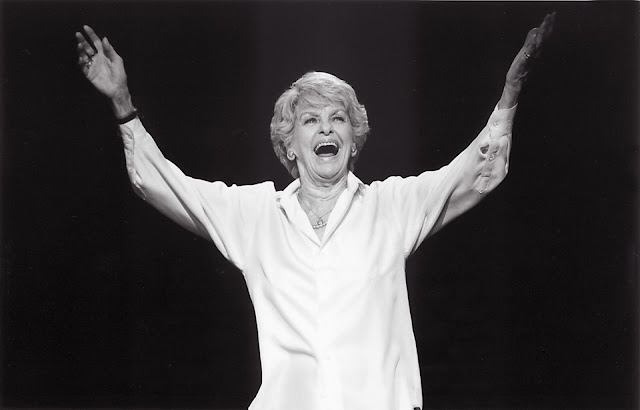 Elaine Stritch was a mass of contradictions.

She came from a loving, intact family and said she longed to be married but she avoided commitment  with all the ferocity of a confirmed bachelor.

She was a lifelong, practicing Catholic but she smoked, drank and cussed like a truck driver and went through a long list of bedmates in the course of a storied career.

She claimed she was most at home and most alive on the stage but opened her one-woman show with a string of complaints about the perils and pitfalls of show business.

She admired decent, practical midwest sensibility but avoided a return to her native Michigan until her final years.

She was said to be a devilish flirt and rarely hid her appetite for the opposite sex but insisted that sex itself was greatly overrated.

She proclaimed a love of New York but when she finally bought a home of her own she opted for a single family home on the main street of a small town.

A lifelong drinker, she joined Alcoholics Anonymous and swore off booze but reportedly continued to imbibe right up to the time of her death.

She was a  scene-stealer and show-stopper who also generously mentored other actors. She was a notorious spendthrift who could be surprisingly generous. She had no children of her own and showed little or no interest in kiddies but bequeathing hundreds of thousands of dollars to a children's health program. She boldly challenged authority and scorned sacred cows but went weak kneed in the presence of greatness.

All of this and more is revealed in Alexandra Jacobs' juicy new biography, Still Here, The Madcap, Singular Life of Elaine Stritch.

To say that Elaine Stritch was a complicated person (and an often difficult personality) would be  an understatement. It wasn't easy to be  her friend. But people were drawn to her and her devotees were legion. She wasn't a great beauty or a melodious songstress and she couldn't dance to save her life. And though she was all the rage in London, you'd never put her in the same league with the giants of the West End.

So, what was  it about Elaine Stritch? Why did she prove to be such a compelling presence, so sought after, such an indomitable star?

Here's the way Jacobs explains it (with a bit of help from Stritch's collaborator John Lahr) in Still Here:

John Lahr: “She was actually the most panic-struck person I ever knew . . . . . her real great acting talent was convincing the world that she was loosey-goosey — that was a complete act. And the world bought it!”

And Jacobs adds: "What [Lahr] recognized was someone of the old guard, someone who knew how to stop a show. Someone with no 'Plan B' . . . someone who’s very survival, psychological and economic, depended on her performance, and the audience liking her performance.
" . . for Stritch home was no place, except when she alighted on the stage. 'Honset to God, when I get into a play — even a musical,' she said, 'that was where I lived.'
"What was Stritch’s talent exactly? . . . It really was entertaining, the root of which means 'to hold together.' In a drawing room or on a stage, Stritch could command the entire space."

Throughout her life, sometimes in spite of herself and sometimes against the most overwhelming odds, from the very start right up till the end, Elaine Stritch held it together!
Posted by Dan Cirucci at 5:15 PM