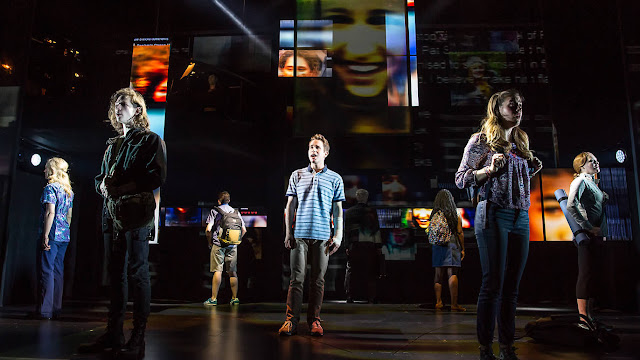 Today less than 24 hours after we saw Dear Evan Hansen on Broadway another high school shooting occurred, this time in Santa Clarita, California. The details are still being sorted out but the alleged shooter is a 16-year-old and today was his birthday.
I mention this because Dear Evan Hansen is about adolescent isolation in the age of the internet. And it deals frankly with high school alienation, the longing for attention and acceptance, and teenage suicide.
But if you're looking for any real insight into what's knawing at high school kids these days from Dear Evan Hansen, you're likely to be disappointed. In fact, it would be generous to call this show a musical attempt at pop psychology.
Evan Hansen comes from a family that consists of just him and a single mom. His parents are divorced and his dad started a new family somewhere else. At school he is bullied and disconnected and can count but a single friend, the terminally nerdy Jared. A hostile student named Connor Murphy badgers Evan and throws him to the ground. Shortly thereafter, Connor (who has his own set of problems, including drug use) commits suicide. And that's where the internet and Evan's ten minutes of fame come into play.
We won't tell you anymore than that.
Dear Evan Hansen consists of a mostly bare stage, eight players, lots of high-tech projections that pose as scenery, a tinny nine-piece band and street clothes in place of costumes. The characters frequently appear solitary and lit by a single spotlight. Often, when they speak to one another they look straight ahead at the audience instead of at one another. When they sing, they simply shout out their feelings in shrill, declarative sentences. In Evan's case, he occasionally switches from a faux tenor to a falsetto without explanation. OK, he's a teenager and he's awkward. Maybe his voice hasn't completely changed. One powerful song (Waving Through A Window) defines Evan's dilemma. Most of the other songs in the show take their cue from "Waving" (or the second-act anthem You Will Be Found) and they sound pretty much the same.
Evan is a senior at his school but we don't know exactly where he lives. We never meet any of his teachers. If he has any goals or occupational aspirations they're never shared with us. His mom is needy, clingy and often whiney. Connor's parents are presumably successful but unhappy and all but estranged. They've spent so much time worrying about Connor that they've apparently neglected his sister, Zoe. All this has made Zoe feel alienated and resentful of Connor. But Evan's got a crush on Zoe.
Dear Evan Hansen is so saturated with incoherent detachment that you come to feel that you're about to drown in a sea of free floating anxiety. There's nothing subtle or nuanced about this show -- so much so that it sometimes seems assaultive. Plus, it's more than cheerless, it's damned near tortuous.
So, why did it win the Tony Award and why is it still running after almost three years with no signs of abatement? Well, for one thing it's been exceptionally well hyped and cleverly marketed. But it also seems to have struck a chord in an America where all the traditional guideposts have sunk into the quicksand of moral relativity. Nobody seems to know right from wrong, good from bad, truth from falsehood, hero from villain, or anything else anymore.
And Broadway doesn't seem to know a series of barely-melodic, angst-filled monologues from an actual musical.
Posted by Dan Cirucci at 7:08 PM