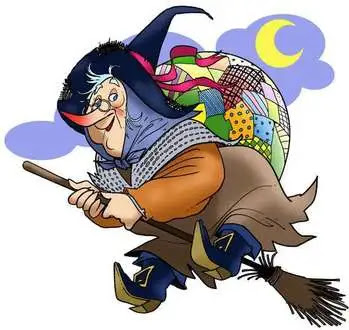 In Italy, this is the day of the "good witch" - La Bafana. The legend of this iconic Christmas visitor has lived on through the centuries.

According to this legend, La Befana was a woman who lived during the time of Jesus Christ. She was a very old woman who loved to clean. One day The Three Wise Men arrived at her doorstep. She invited them in and fed them. As they were leaving they asked the old woman if she would accompany them on their journey to see baby Jesus. La Befana refused. She had too much cleaning to do.

After The Three Wise Men left, she had a change of heart. She went after them in hopes to see the new king that was born in Bethlehem. She got lost and never found him. To this day, she has never given up the search for baby Jesus. Every year on the eve of the Epiphany, she travels on her broom in search of Jesus Christ, dropping off gifts to children along the way.

Some Italian children believe that La Befana is the wife of Santa Claus. She lives in the South Pole while Santa works with the elves in the North Pole. She is an elderly woman who has a crooked nose. Her clothes are patched and her shoes are worn out. Some believe her hair is white, others imagine her hair black. She is also covered in soot because she enters the houses through the chimney.Italian children hang their stockings up and leave out food and wine for La Befana. She comes in though the chinmey. Good little children get candy and toys. Bad children get lumps of coal, onions, soot or garlic. Before leaving she uses her broom to sweep up and clean the home.