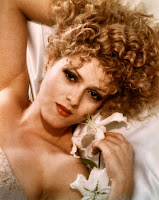 I'm not one to use the word "diva" without good reason.
But Broadway legend Bernadette Peters truly is a diva in the best sense of the word.
Broadway has been Bernadette's life.
She made her stage debut at nine in This is Goggle, a comedy directed by Otto Preminger that closed during out-of-town tryouts before reaching New York. She first appeared on the New York stage at age 10 in the New York City Center revival of The Most Happy Fella (1959). At 13 she appeared in the role of a "Hollywood Blonde" and was an understudy for "Dainty June" in a touring company of Gypsy. Upon graduation from high school, she started working steadily, appearing Off-Broadway in the musicals The Penny Friend (1966) and Curley McDimple (1967)and as an understudy on Broadway in The Girl in the Freudian Slip (1967). She made her Broadway debut in Johnny No-Trump in 1967 and next appeared as George M. Cohan's sister opposite Joel Grey in George M! (1968), winning the Theatre World Award.
The rest is a series of Broadway triumphs: Dames at Sea, Mack and Mable, On The Town, The Goodbye Girl, Sunday In The Park With George, Song And Dance, Annie Get Your Gun and Gypsy. Every time she steps onto a stage the gal who was born Benadette Lazzara in Queens gives the performance of her life.
We saw Bernadette in concert the other night at The Mann Center, Philadelphia's celestial outdoor venue. Thanks to the folks at PECO Energy (which sponsors PECO Pops At The Mann) it was a wonderful night. We can't think of a better way to spend a summer evening (or any evening for that matter) than watching and listening to Bernadette Peters.
Bravo!
Posted by Dan Cirucci at 7:03 AM