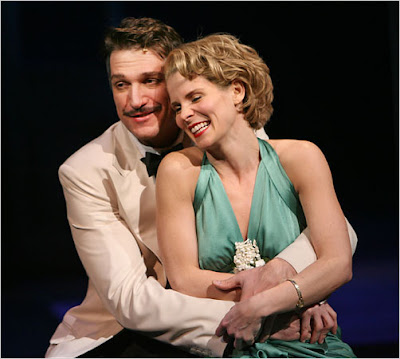 Rarely - and I do mean rarely - we are treated to a transcendent experience in the theatre: something so powerful; so overwhelming; so meaningful and so close to perfection that we remember it for the rest of our lives.
Over many decades I can count on one hand when this has happened to me: in 1970 when I saw Stephen Sondheim's musical Company; in 1979 when I experienced Sondheim's Sweeney Todd; in 1994 at the thrilling production of Andrew Llyod Webber's Sunset Boulevard; again in 1994 at the Harold Prince full production of Jerome Kern's Show Boat and in 1998 at the Paper Mill Playhouse production of Sondheim's Follies.
Ten years is a long time to wait.
But yesterday we finally got to add another transcendent experience to our list.
I'm talking about the new Lincoln Center production of Rodgers and Hammerstein's South Pacific starring Kelli O'Hara and Paulo Szot (pictured). One critic summed it up best when he said this splendid production "gives new meaning to the word grand."
It has taken nearly 60 years for South Pacific to come back to Broadway in a full production. Thank goodness the Rodgers and Hammerstein organization waited and waited waited till things were just right. This production at the Vivien Beaumont Theatre features a full 30 piece orchestra with the same orchestrations and instruments that were used in in original 1949 production starring the great Mary Martin and Enzio Pinza.
Critic Ben Brantly in the New York Times has correctly noted that this new production reinvigorates the "concept of the organic musical, in which song feels as natural as breathing" and he points out that "this reflective aspect infuses every number; nothing is performed as a clap-for-me showstopper." The show flows seamlessly and every single performance is superb right down to the smallest parts. But when O'Hara sings "I'm In Love With A Wonderful Guy" or Szot sings "Some Enchanted Evening" or "This Almost Was Mine" you can feel the joy, the unabashed romance, the poignancy.
Suppression performs the ultimate seduction in this South Pacific. It isn't over-amplified. It isn't over-staged. It isn't over-played. And even with its drumbeat message of tolerance, it never really gets preachy.
This is an American Grand Opera. It's a transcendent theatrical experience, thrilling beyond belief.
Whatever you do, don't miss it!
NYT photo by Sara Krulwich
Posted by Dan Cirucci at 6:39 AM

Saw this with my wife at Lincoln Center last Friday, and you are correct, sir. This is some of the most sublime singing i have ever heard on stage. If there is any justice, Kelli O'Hara should be a major star (of stage and screen0 for a long long time. And Paulo Szot's "This Nearly Was Mine" was tremendously moving. Loved the singing of the kid who played Joe Cable, too.

Sorry I can't say I share your opinion of Mac's VP choice. But you are spot-on in your evaluation of South Pacific. If I were writing a review I'd headline it thusly: "An Intimate Epic"

Thank you, Michael for your kind comments. I'm happy to see that you're following the blog - and that we share the same fine taste in music and theatre.
I wish O'Hara and Szot the best but it often happens that great stars of Broadway are unable to transfer their stardom to the screen - or even to TV. Mary Martin flopped in Hollywood. Ditto, Ethel Merman. And other great B'way divas (Bernadette Peters, Patti LuPone) seem to truly shine only in live performances.
In any event, what would we do without the theatre? There's something about seeing it LIVE that makes all the difference.
Then there's that other great, big, live stage show: The Political Convention. There, you and I can maintain opposite political views but still enjoy the spectacle.
Great to hear from you!