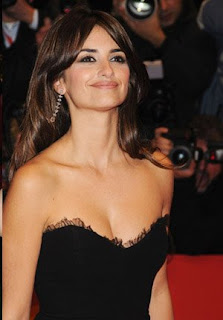 Is there a more beautiful image on the screen today than Penelope Cruz?
Cruz shines in Vicky Christina Barcelona which we enjoyed over the weekend.
In this movie, two young Americans spend a summer in Spain and meet a flamboyant artist (Javier Bardem) and his beautiful but insane ex-wife (Penelope Cruz). Vicky (Rebecca Hall) is straight-laced and about to be married. Cristina (Scarlett Johansson) is a sexually adventurous free spirit. When they all become amorously entangled, the results can be both funny and harrowing, often at the same time.
The film has opened to brisk business and has achieved a solid 79% favorable rating at Rotten Tomatoes, a reliable site that collects the verdicts of hundreds of film reviewers.
Much of the appeal of the film has to do with the beautiful footage of Barcelona and the intense performances of Bardem and Cruz. They are simply great fun to watch and Cruz plays a tempestuous, sultry character with such adroitness that she brings back fond memories of Ava Gardner and similar stars. Plus, the whole story gives us much to think about as it juxtaposes European and American manners and sensibilities.
In fact there is a political undercurrent to this movie: Even so-called "hip" Americans who deperately want to be European can't seem to pull it off; cant' seem to really let go; can't seem to plug into the European mindset and lifestyle. In the end, they wind up looking evry bit as foolish ad they actually are.
Posted by Dan Cirucci at 1:01 PM