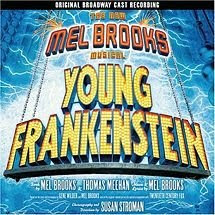 Since we're speaking of the Big Apple, if you haven't seen the new Mel Brooks Broadway musical Young Frankentsein you're missing a monster hit.
The show (which will celebrate its first anniversary on Broadway in November) is the Outer Critics Circle Best Musical Award winner and it's better than Brook's more acclaimed The Producers and far, far better than the popular hit Spamalot. In fact, this show makes Spamalot look like a high school musical.
Young Frankenstein is one of the biggest, wittiest, laugh-out-loud funniest Broadway shows I've ever seen. It's worth the price of admission just to watch Beth Leavel (Frau Blucher) perform the hilarious number "He Vas My Boyfriend." Brooks' music is tuneful and catchy and the lyrics are clever. The book (by Brooks and Thomas Meehan) is filled with quick jokes, witticisms and double-entendres and has the advantage of being not nearly as in your face as The Producers or as juvenile as Spamalot.
The cast is first rate at all levels and the production values on this show are nothing short of amazing. You will be dazzled.
This is Broadway musical comedy at its best - the kind of show we see far too rarely on the great white way these days. Go! Laugh! Enjoy!
Posted by Dan Cirucci at 10:20 PM