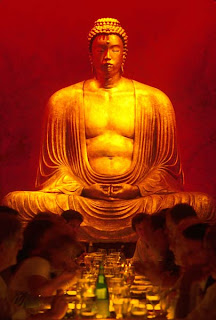 On Sunday we returned to one of our favorite Philly restaurants, Buddakan.
Along with The Continental Buddakan is among Steven Starr's most successful creations. In fact it's so successful that it has already spawned outlets in New York and Atlantic City. The orginal Philadelphia version of this modern Asian restaurant nonetheless retains a distinctive appeal. And so it has drawn us back again and again.
Now, I'm not going to say that we didn't have a pleasant experience. We did.
And I'm not going to say that the service wasn't efficient. It was.
And I won't say that the food wasn't any good. It was fine and it was plentiful.
But something was missing.
It's almost as if the whole place was on automatic pilot and that everything had been programmed so that those in charge knew just how attentive they ought to be (no more, no less) and understood just how much they wanted us to spend (more, not less) and just how much time we were supposed to stay (less, not more). It was just a bit too corporate, too slick, too cool, too claculated and too impersonal for our tastes.
And what that means is that in the end it simply wasn't very memorable.
Maybe next time.
Posted by Dan Cirucci at 6:43 AM