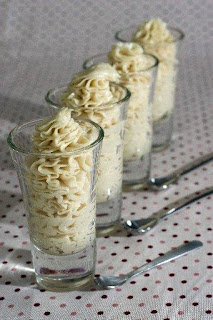 Cupcakes are popping up everywhere!
In fact, they're the hottest new treat trend.
In New York the best cupcakes are said to be found at Magnolia Bakery. At Magnolia you can choose your cupcake and your icing, combining them as you like.
But now you can pass on the cupcake and just enjoy the icing. Isn't that what you really wanted anyway?
From Terry Tang of the Associated Press:
Think you can handle a shot of the hard stuff? Better saddle up to the bar with your toothbrush.
The bake-shop boom that has fueled the oh-so-retro love affair with cupcakes has spawned a new - albeit micro - trend that has Saturday-night hipsters doing a new style of shot that won't burn your gullet like 150 proof.
Frosting shots.
And yes, it's exactly what you think it is. At a handful of cupcake storefronts around the country, including Denver, the frosting shot has emerged as a short-but-sweet pick-me-up for urbanites and college students.
The gist is generally the same from bakery to bakery: For a small fee, customers get a dollop of their favorite frosting in a paper or plastic cup, about the size of a frozen-yogurt sample.
While some bakeries keep the frosting shot a strictly must-ask-for item, several cupcake shops have made it an official menu offering.
In Denver, Happy Cakes in the Highland neighborhood has had frosting shooters - they come with little spoons for the decorous - on the menu since opening.
"We started them because we had friends who were big fans of frosting but not necessarily cake," says co- owner Lisa Herman. "We started doing frosting shooters with friends, and then we put it on the menu for 75 cents. Who doesn't love frosting?" The shop even offers a T-shirt that reads, "I'm So Frosted."
Photo by Larry Crowe, Associated Press
Posted by Dan Cirucci at 6:17 AM