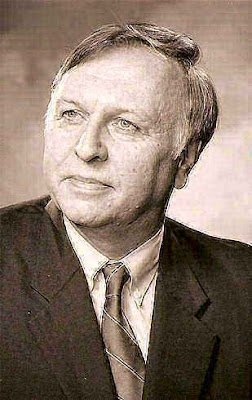 I am one of the thousands who can say that I learned my craft at the foot of The Master - Dr. Don Bagin.
Dr. Bagin was a giant in the field of public relations. He was, literally and figuratively bigger than life. But he was also the definition of authenticity: always human, accessible, kind, encouraging, generous. He took great pride in the success of his students - dedicated professionals who assumed important positions in communications all over the world. But his pride was always, always tempered by humility.
A soft spoken man with a gentle manner, he was one of the hardest-working professionals I've ever encountered. Yet, he always found time for his students - even years after they were no longer in his classroom. Today, I use Dr. Bagin's book to teach public relations.
He is always with me - always my teacher, my professor, my guide, my touchstone.
Visitation will be tonight beginning at 5 PM at the McGuinness Funeral Home in Sewell not far from Rowan University in Glassboro.
Visitation continues tomorrow at 8:20 AM followed by Mass of Christian Burial at Our Lady of Lourdes RC Church in Glassboro.
Dr. Bagin's remarkable legacy:
Donald "Don" Bagin, of Sewell, N.J. A Rowan University professor for more than 40 years who coordinated media for the Glassboro Summit Conference between U.S. President Johnson and Russian Premier Kosygin, and who published an international communications management newsletter, died peacefully at his home.
At only 25, Dr. Bagin was appointed the youngest tenured full professor in the history of Glassboro State College. In his first year as a professor, he created the school's public relations program – the first graduate program in school PR in the world. At 28, he hosted more than 1, 400 media – while dealing with the Secret Service for two heads of state – for a summit meeting between U.S. President Johnson and Russian Premier Kosygin at Glassboro State College's Hollybush.At Glassboro State College/Rowan University, Dr. Bagin taught more than 2, 000 students over his lengthy career. PR Reporter, an international publication, named Dr. Bagin one of the three best public relations teachers in the country.
In 1986, the National School Public Relations Association recognized him with the president's award as the individual who had done the most to bring schools and communities closer through effective communication. He was a nationally recognized speaker and presenter on school PR and communication management. Dr. Bagin had written more than 300 articles on education and public relations, and more than 15 books.
His school PR textbook is used in universities across the nation and is translated into Chinese and Polish. Dr. Bagin also served as public information officer for the New Jersey State Department of Education, and taught at both Souderton and Neshaminy high schools early in his career.
While a full time professor, he saw a need to educate and train business executives on better workplace communication. With colleagues from Glassboro State College, he founded communication briefings publishing company. What began as a single newsletter in 1981 grew into educational videos, audios, publications and conferences used by Fortune 500 companies, universities, government entities and non-profits. He sold the company in 1994 when it had 50, 000 subscribers and 25 full-time employees.
"Don was a witty punster who always challenged his students and employees to reach their full potential," said Ed Moore, a Rowan University professor who also served as managing editor of communication briefings. "He had a special gift for making those around him better."
In addition to being an honored professor and entrepreneur, he was a loving husband, father and grandfather. What Don enjoyed more than anything was being with his grandchildren. "His grandkids were the loves of his life," said Carole, his loving wife of 42 years. "They were what kept him alive and fulfilled his life as his health declined."
Before his death, Don requested that in lieu of flowers, those wishing to contribute in his name give to The Children's Fund for Glycogen Storage Disease (GSD) Research, 917 Bethany Mountain Rd., Cheshire, CT 06410 (http://www.curegsd.org/).
His 9-year-old grandson Justin Donald battles the incurable liver ailment.Don also enjoyed handicapping horseracing, watching all Philadelphia sports teams and attending Villanova University basketball games.
Dr. Bagin received his B.A. and M.A. from Villanova University and Ed.D. from Temple University. He was born in Philadelphia and raised in Lansdale, PA
Posted by Dan Cirucci at 10:20 AM