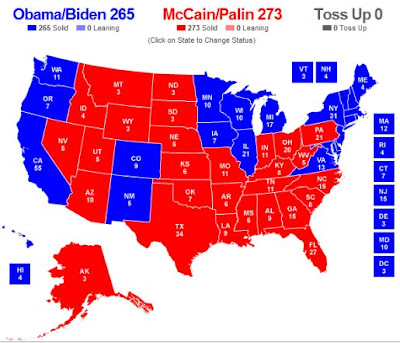 Ed Morrissey over at Hotair.com has charted a pathway to victory for John McCain - a road that runs straight through Pennsylvania. I say it's doable.
But McCain can win even without Pennsylvania.
Note that this map gives Obama New Hampshire, New Mexico, Colorado and Vriginia -- four states that McCain could still win.
So, there are many combinations here that could take McCain past the magic 270 electoiral votes.
If voters tip McCain's way on election eve and late udecideds break for him then the closely-contested battleground states will tip as well.
If you look close you can see more than one road to victory.
Posted by Dan Cirucci at 12:57 PM