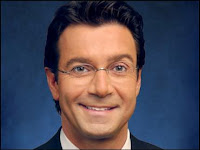 For a long time (maybe too long!) Philadelphia TV weather guy John Bolaris has had a reputation as a lady's man -- and that's putting it mildly.
By all accounts, Bolaris can't seem to stay away from the babes. And, by some accounts, they can't seem to keep their hands off him.
We're not sure exactly sure what it is with this guy -- it's not like he looks like Brad Pitt or anything like that. But when you mix Bolaris and babes, there's just no telling what's gonna happen.
Now comes the latest chapter as reported by our friend Dan Gross in the Philadelphia Daily News.
An excerpt follows:


Fox 29 meteorologist John Bolaris has been suspended indefinitely by the news station just days after Playboy magazine published an article about his being drugged and scammed by two European hotties in Miami Beach in March 2010, a story first reported by the Daily News this past May.
Bolaris is quoted throughout the story, in which he admits he went with the women because "I'm a guy. There was the thought I might get laid," and discusses his reputation as a ladies man. He also shares nude photos of women on his cell phone with writer Pat Jordan.
Station sources say Fox 29 management is upset at how the weatherman comes off in the story, which is the latest occasion in which he has upset management.