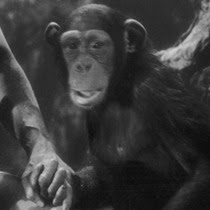 Cheetah.
You remember him.
He was Tarzan's chimp and mainstay in those old Johnny Weissmuller Tarzan movies of the 1930s.
Cheetah died of kidney failure Saturday at Suncoast Primate Sanctuary in Palm Harbor, a sanctuary spokeswoman said.
Chimps have a life span of 24 to 35 years in their natural habitat and up to 45 years in a zoo.
Cheetah was roughly 80 years old and was said to have loved fingerpainting and football.
There's no question that Cheetah was a Big Hollywood Star. And he hammed it up right to the end of his days.
They say he was an outgoing chimp who was exposed to the public his whole life. He enjoyed people and enjoyed entertaining them and seeing them laugh. And he caused few problems at the sanctuary. He had a good disposition.
Cheetah acted in the 1932-34 Tarzan movies including "Tarzan and His Mate" and "Tarzan the Ape Man," according to the Internet Movie Database.
Sometime around 1960, Cheetah came to the sanctuary from Weissmuller's estate in Ocala.
Like many others, I saw the old Tarzan movies years later on TV. I remember Cheetah as wonderfully agile, affable and funny. Seems to me he was in all the movies' final scenes, always having fun. By all accounts, he led a charmed life.
Posted by Dan Cirucci at 11:15 AM