Movie Review: Wrap Yourself In The Story Of 'Mud' 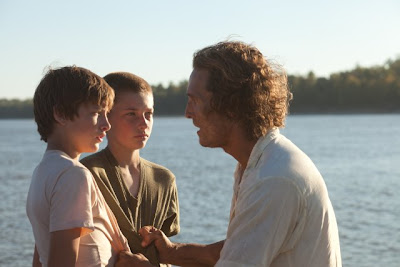 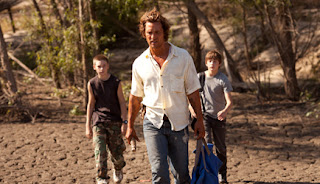 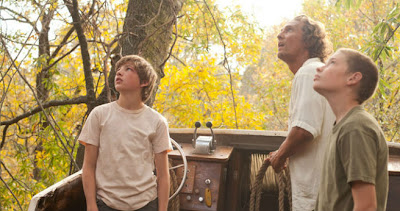 What if we told you that heartthrob Matthew McConaughey would make his mark as a serious actor playing a grimy, tale-spinning, seemingly hopeless Arkansas drifter named Mud in a movie of the same name?
Would you believe us?
Well, you'd better, because that's exactly what's happened thanks to Mud which opens tomorrow and which arrives with the prestigious Palme d'Or at the 2012 Cannes Film Festival. But don't let that elite homage from France scare you away. This is no tedious European exercise in haute cinema. This is American storytelling at it's best.
Written and directed by Jeff Nichols, Mud also stars Reese Witherspoon, Sam Shepard, Joe Don Baker and two youngsters (Tye Sheridan and Jacob Lofland) who make this a coming-of-age story you'll never forget. Indeed, Sheridan and Lofland are superb!
In the tradition of Stand By Me, The 400 Blows, The Go Between, The Reivers and To Kill A Mockingbird, Mud has a decidedly literary feel. There's a real, compelling narrative here and it unfolds as slowly and carefully as an Arkansas summer afternoon.
It's so refreshing to come upon an American movie without a drop of smugness or cynicism -- no smirks, no snide asides, no smarminess. This movie not only has a story but a soul as well. Like a rich, southern novel it embraces fable, legend and life-lessons all intertwined together with a few twists and turns along the way. It's also deep into the darkness and the mystery of the South.
In Mud, two teenage boys encounter a fugitive and form a pact to help him evade  bounty hunters. Why are the bounty hunters on Mud's trail? What does he have to hide? What is he running away from -- or toward? Well, those are all questions that the movie seeks to answer. What we can tell you for now is that this story involves love -- unrequited love, lost love, puppy love, parental love and the love of a certain time and place and way of life.
But there's nothing sentimental here; nothing obvious; nothing squishy.
Instead, you are invited to wrap yourself in this compelling story, delve into the depth of these unforgettable characters, see what you see, hear what you hear and make your own judgements.
In other words, this is a film that doesn't insult the [assumed] intelligence of its audience.
Mud is certainly the best film we've seen so far this year.
Don't miss it!