Review: This Big Wedding Is One Big Mess 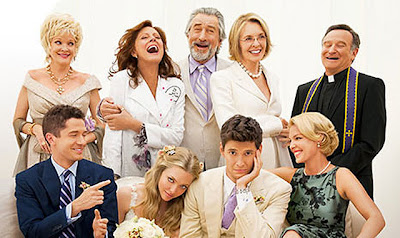 In the first scene of The Big Wedding (which opens in theaters today) Robert De Niro (the father of the groom) is attempting to perform cunnilingus on Susan Sarandon (his live-in lover and pretend wife) while Diane Keaton (the mother of the groom) looks on. And this all happens in the kitchen.
The Big Wedding places a bevy of big stars in a movie that turns out to be a big mess. From the somewhat smutty opening scene to the often cheesy dialogue to the soft porn antics of the characters, this is a film that's more embarrassing than entertaining. And it isn't funny either.
Sadly, this snickering excuse for a wedding story reflects just how far Hollywood has fallen from its narrative-driven, studio-dominant glory days.
And how did De Niro, Keaton, Katherine Heigl, Amanada Seyfired, Tropher Grace and Ben Barnes get involved in an abomination like this? As for Robin Williams and Susan Sarandon, they had rather sleazy reputations going in, so who cares about them anyway?
It's particularly sad to see Keaton and De Niro in this sordid fruit salad. It's not like they need the dough. What was in their minds when they green-accepted these roles? They don't even have much chemistry together so their pairing doesn't seem plausible.
The tagline for this movie proclaims: "It's never too late to start acting like a family.
Well, guess what? For the characters in The Big Wedding, it's far too late.
Our advice: Stream Father of the Bride (the original or the 1991 version) or My Best Friend's Wedding or My Big Fat Greek Wedding or The Wedding Singer or even Wedding Crashers.
But skip The [no so] Big Wedding.
Posted by Dan Cirucci at 9:47 AM