The Woman Who Defined American Conservatism 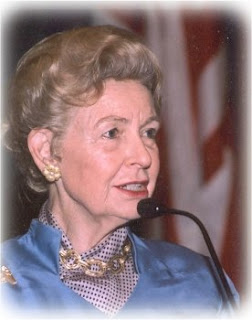 When you type the word "Phyllis" into Google, hers is the name that instantly appears.
She's an icon, a legend, a certified pioneer.
In fact, Ladies Home Journal named her one of the 100 Most Important Women of the 20th Century.
Long before it was common, she demonstrated just how much women could achieve and how they could achieve it.
She is a Phi Beta Kappa graduate of Washington University, received her J.D. from Washington University Law School, and received her Master’s in Political Science from Harvard University. In 2008 Washington University/St. Louis awarded her an honorary Doctor of Humane Letters, just one of the many honors she's received over an abundant lifetime.
Love her or hate her, she is one of the most tireless, passionate, well-informed and accomplished advocates on the face of the earth.
Next year she will celebrate her 90th birthday and she's still goin strong.
She's the Mother of the Modern Conservative Movement in America and unquestionably a heroine to all who care about individual freedom, personal responsibility, limited government and the beliefs, values and principles that guided America's founders.
She's Phyllis Schlafly.
Cent anni!
Posted by Dan Cirucci at 10:34 PM