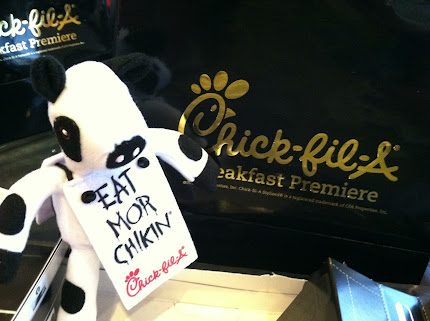 Yesterday we were invited to a preview party at our local Chick-fil-A to taste the new items on CFA's appealing breakfast menu.
And, we gotta tell 'ya -- the party was great fun. And the new breakfast choices are bound to become instant favorites.
But you can't get these new breakfast treats everywhere -- not yet, anyway.
Still, CFA is testing them in the greater Philadelphia area (and other select markets) right now. The CFA participating stores will report back to corporate on customers' reactions to these items.
Here's what's being offered at the Chick-fil-A Cherry Hill NJ location in the Garden State Park Town Center on Route 70:
Sausage, egg and cheese English muffin.
Bacon, egg and cheese bagel.
Cinnamon biscuit roll.
Chick-fil-A maple waffle.
Our favorite of the four was the maple waffle. It was amazing. It's fluffy and yet just crisp enough. It's also surprisingly light. And here's the great thing about it: The maple syrup taste is built into the waffle so the waffle's not messy or sticky. This is a solid winner!
We also liked the sausage, egg and cheese English muffin. The cinnamon biscuit roll is seen as a logical replacement for CFA's current cinnamon cluster. Flakey like a biscuit but also sweet and tasty.
It's difficult to perfect the bagel but CFA is working on it. And this bacon, egg and cheese bagel is better than the whole or multi-grain bagels offered at some other fast food outlets.
Chick-fil-A is a treasure -- a great American company delivering quality and value with outstanding service in a clean, bright, inviting, family-friendly atmosphere.
They got our vote!