Obama's Dog Flies To Vaca In His Own Private Osprey 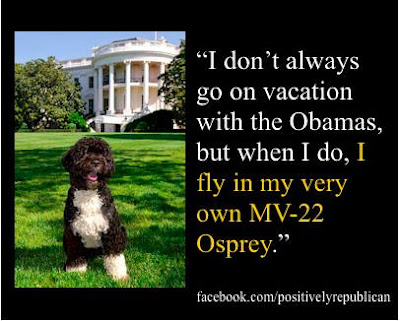 President Obama's Portuguese Water Dog, Bo arrived at the president's tres chic Martha's Vineyard vacation estate on his own MV-22 Osprey, a hybrid aircraft which takes off like a helicopter but flies like a plane.
It was the first time the Ospreys have been taken on vacation by any America president.
And how much did that "dog run" cost us? Hmmm?
Well, according to the Government Accounting Office (GAO) it costs $11,000 per hour to fly an Osprey.
The Osprey is typically used for military operations, not as a presidential dog taxi.
Posted by Dan Cirucci at 4:44 PM

I just wonder when the girls are coming? They weren't with their parents, not with the dog...Are they going on their OWN airplane??