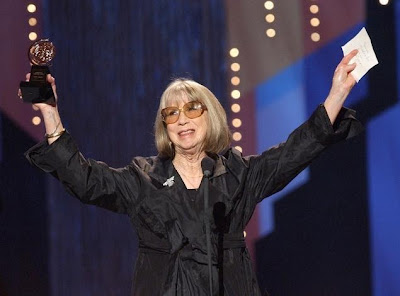 On Broadway, a bright shining light has gone out.
Julie Harris has died.
She was simply born to act.
And she was justifiably one of the most honored performers in Broadway history.
Her roles ranged from the flamboyant Sally Bowles in "I Am a Camera" to the reclusive Emily
Dickinson in "The Belle of Amherst." She was 87.
We had the good fortune to see her in "The Belle of Amherst" at the McCarter Theater in Princeton. It was a performance we will never forget -- a one-woman tour de force in which Harris commanded the stage every minute and gave new meaning to the term "suspension of disbelief." She was Emily Dickenson.
Harris died at her West Chatham, Mass., home of congestive heart failure, actress and family friend Francesca James said.
This great American performer and beloved Broadway star won five Tony Awards for best actress in a play, displaying a virtuosity that enabled her to portray an astonishing gallery of women during a theater career that spanned almost 60 years and included such plays as "The Member of the Wedding" (1950), "The Lark" (1955), "Forty Carats" (1968) and "The Last of Mrs. Lincoln" (1972).
She was honored again with a sixth Tony, a special lifetime achievement award in 2002.
Her record has not yet been equaled.
Audra McDonald has five Tonys, and Angela Lansbury has four Tonys.
Harris slowed down in recent years. She suffered a stroke in 2001 while she was in Chicago appearing in a production of Claudia Allen's "Fossils." She suffered another stroke in 2010, James said.
She also starred in the long-running TV show Knots Landing as the free-spirited Lilimae Clements, Valene’s mother. She played Lilimae from 1980-1987.
Harris leaped to fame at age 24 playing a lonely 12-year-old tomboy in “The Member of the Wedding.” She repeated the Broadway role in the 1952 film version. She was also James Dean’s romantic co-star in “East of Eden.”
As a young woman, Julie Harris declared in high school "acting is my life." She had the good fortune to be blessed with a natural talent, to recognize that talent at an early age and to embrace it, cultivate it and make it her life's work as she shared it so generously and lovingly with others over so many decades, so many performances and so many treasured moments.
RIP, Julie Harris.