Yeah, it's 2016.
And we've already called this The Age of Narcissism -- which is exactly what it is. Never has self-infatuation been more on display than it is now. And it's spilt over -- seeped through, actually like a foul, pernicious goo -- from the popular culture into all of politics. It's done this enabled by the media and an increasingly distracted audience bent on instant gratification.
To be sure, politicians have always had a healthy dose of ego. They've had to because politics really is show business for ugly people. Politics is the obvious haven for those who don't have very much to offer but still think the world of themselves.
And so, that's how we got into this situation this year -- both on the Republican and Democrat sides of the ballot. Ego. 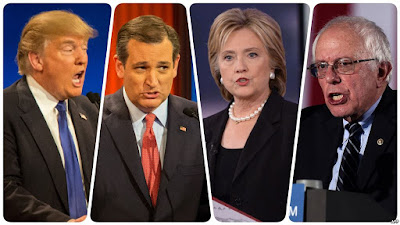 To be fair, you could say this really started with Obama, whose ego has pretty much always been out of control. After all, what else would have convinced someone who was a U. S. Senator for barely 24 months that he should be president? But, let's put Obama aside for a moment. After all, his term is almost up (which is quite appealing, actually) and we don't want to give him anymore attention.
Instead, let's start by looking at the original GOP field.
Seventeen candidates!
What in hell made people like Gilmore and Santorum and Huckabee and Graham and even Perry think they should be running for president in the first place? It had to be ego -- ego and an endless thirst for attention. How else could you possibly explain it?
And so you had a ridiculously huge collection of swelled heads straight across the pachyderm dotted landscape.
Had there only been one or two right-of-center GOP candidates in the race, this would have been an entirely different race and it would be ending differently. But entrenched ego? Well, you know how that is. Entrenched ego rarely faces reality.
So, well past the point where some of these candidates (really, most of them) should have dropped out and/or made a deal or entered into some kind of a pact or whatever, they stayed in and kept slogging along. It was pitiful!
And that was a situation that was tailor-made for Donald Trump. Yes, you remember him, right? He's the man they said would always threaten to run for president but never actually take the risk. Remember?
Well, Trump knows a thing or two about ego. Indeed! As he himself said (in his hugely successful book, How To Get Rich): "Show me someone without an ego, and I'll show you a loser." Now, that's a real maxim for out times, isn't it?
Which translates as follows: The master of all ago seizes the moment, does everything that he can to diminish the multitude of egos around him and survives by mastering the ego-infatuated popular culture with periods of provocation, shock therapy, juvenile humor and catchy slogans. But the slogans astutely channel a combination of people's deepest hopes, fears and visceral longings. In the end, he stands atop a vanquished pile of lilliputians. Well, they weren't really lilliputians, but look at them now. Whew!
And on the Democrat side?
Hmmm . . . actually, every bit as bad -- maybe worse!
Here we've got a power-hungry wife of a wildly-egotistical perjurer and alleged predator.  This is a woman who clawed her way to the top on the backs of two presidents who came to define the modern nature of the oval office as nothing more than a huge, distorted sphere of self-adulation. She's learned from the best.
And what else but ego would convince a husband and wife that they should both King of the World?
Lined up against her we have a beat-up old socialist septuagenarian from Brooklyn who was reportedly thrown out of a commune because he didn't work hard enough -- a man who failed at just about everything he tried until he was so angry at the world for not recognizing his Greatness that he stumbled into politics. What else but ego would make a senator who never passed a single piece of significant legislation think he could or should be president?
Yes, ego got us here.
It was all about ego.
And we'll get to choose from two "yooge" and somewhat paranoiac egos for President of the United States. One sees everyone who opposed her as part of a vast conspiracy -- uncaring, cruel and selfish. The other sees everyone who opposes him as losers -- insecure, unmotivated and dumb.
This is our choice.
It's sort of like Evita vs William Randolph Hearst -- two great egos who actually did run for president of their respective nations.
But is it any worse than some of the other choices we've faced in recent years? Is it?
And this year it seems we will get the chance to vote for an honest-to-goodness outsider -- someone who has never held office, has never even sought office before and has never really been involved in politics in this manner. Indeed, someone who is completely outside the traditional political establishment. Of course, this is precisely a big part of his appeal.
And then there's this: The American people are restless this year.
They're antsy.
There's something gnawing at them.
They don't want to be told what to do or how to do it.
They're thinking: "I'm mad as hell and I'm not going to take it anymore!"
They're in the mood to smash every dish in the dining room breakfront, overturn all the furniture in what's left of the living room, empty all the bedroom drawers onto the floor and let the bathtub water overflow.
But they'll leave the TV and the laptop on, thank you.
So, in that case, against what would seem to be obvious odds, you're well-advised to bet on the master entertainer -- the outsider.
God bless America!
Posted by Dan Cirucci at 8:51 PM