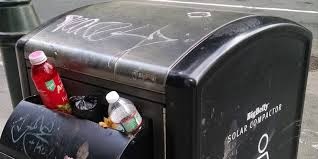 Has anybody noticed that since Jim Kenney became mayor of Philadelphia, center city seems more trashed than at any time in recent memory?
There are more unsavory characters on the street (even in Rittenhouse Square and environs) and aggressive street peddlers and panhandlers seem to dot every corner. Broken, uneven sidewalks, and loose bricks are common while skateboarders and cyclists ignore rules both on the street and along sidewalks (where they aren't supposed to be at all).
Those "solar-powered" trash bins are dirty and overflowing while trash and debris swirl around underfoot. Even as new buildings rise, center-city becomes increasingly hostile and menacing street-side. Kenney has basically said he cares more about "neighborhoods" than center city -- and it certainly shows, more and more every day!
BTW: At the same time, center city has also become a have for radical leftists demonstrators who tie up traffic and now successfully close down whole blocks. Sad!
Posted by Dan Cirucci at 3:30 PM