Kelly And Michael: Never To Be Reunited? 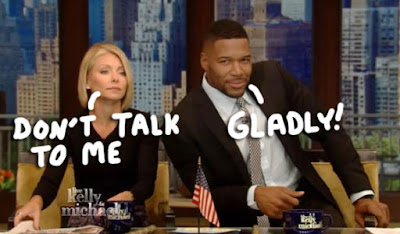 People who are supposed to know about these things tell us that Kelly and Michael will be reunited (when Kelly presumably returns) on ABC-TV's Live! later this week.
And, officially, that sounds logical. After all, they're both under contract, they both make a lot of money and there's a show to do this week and every other weekday between now and September when Michael  finally leaves Live! for Good Morning America. (Talk about a l-o-n-g goodbye!)
Still, that sounds about right.
But, we're not so sure.
And, we're betting that if anybody eventually fails to show up for lots and lots of remaining shows it will be Michael. After all, why should Kelly absent herself? She's been doing Live! a whole lot longer than Michael and she's the show's star and prime mover. 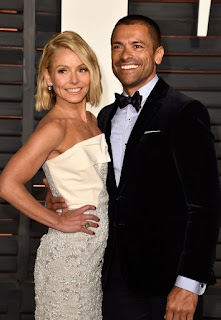 So, it's a good bet that Michael will be taking a good many days off or he may simply be leaving the show way early (like in June or even earlier) since the summer is slower anyway.
Frankly, it makes sense for Michael to leave now and save the show and Kelly any future embarrassment.
Because, Michael totally botched it. When he decided to leave the show without informing Kelly first, he done her wrong! Big Time!
He should have explained it all to Kelly first. In fact, let's be honest, here -- he should have consulted Kelly first, if only as a courtesy. Kelly made Michael -- not the other way around.

Who's best to serve as a temporary co-host until Michael's replacement is chosen?
The obvious choice would be Kelly's husband, Mark Consuelos. Mark is perfect for the job. He's poised, telegenic, natural, funny and engaging. 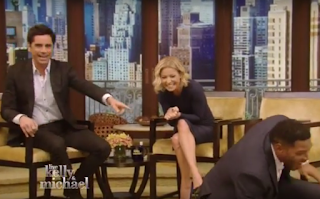 Plus, he knows the show inside-out and he's someone that Kelly can really trust. And, if they don't mind working together every day, they'd even make the perfect pair as permanent show co-hosts. But that will be up to them.
As for us, we're all in for Kelly.
And we're betting she'll come out of this strong and better than ever!