Does He Really, REALLY Want This? Does He?

Do you really, really, really want it?
It's a question nearly all of them have had to face.
Franklin D. Roosevelt had to face it after he was struck with polio and undertook a long, grueling period of (semi) rehabilitation. Harry Truman faced it after he finished FDR's unexpired term and found himself so unpopular that many in his own party abandoned him. Dwight Eisenhower faced it when he couldn't even decide which party's banner he wanted to run under.
John F. Kennedy was never even terribly interested in being a politician, not to mention President of the United States. Kennedy wanted to be a journalist. But then his older brother was killed in the war and that changed everything.
Lyndon Johnson wasn't even sure he wanted to seek a full term in 1964.
After he lost a gubernatorial race in California, Richard Nixon thought he'd be a mere footnote (if that) in the history books.
Ford was an accidental president. Carter seemed a fluke. By 1980, Reagan lost two White House bids already and was thought to be irrelevant. George H. W. Bush never seemed to have the fire in his belly for the job. Clinton had that but then nearly squandered it all.  W. Bush appeared to triumph on a legal technicality and Obama took a big, bold chance just as events conspired to grant him his wish.
Yes, the road to the White House is never what it seems. 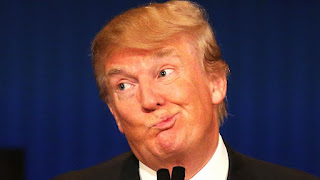 But the larger point is that each aspirant faced a decision at a critical juncture: Do I really, really, really want to be president? How badly do I want this? Why do I want it and what will I do with this? Ultimately, am I really willing to fight for it -- to do everything it takes to make it happen? Am I?
This is the point that Donald J. Trump seems to be at now.
OK, it's rather late in the game for this question. But this is where we are. And, incredibly, for Trump the real question appears to be: Am I serious about this?
Trump has toyed with this before. He almost ran for the office two or three times. This time around, more than a few people doubted he would make the leap. And you have to believe he even surprised himself with his astounding winning streak in the primaries and the record number of votes that he amassed in a very crowded field.
No doubt about it -- he's clearly enjoyed every moment. He's taken obvious delight in it.
But now Trump has to decide if this whole thing has been just a lark for him -- if it's been some kind of thrill for him and/or a psych on all of us. Or, if this is the real deal. And we deserve to know if we've been played; if we've been punk'd.
And there are other questions that come to mind as well.
Has this all been some kind of personal double-dare game that Trump's playing? Has he done it purely to bulk up his name or his brand or his business? Is it a marketing ruse? Is it all a big ego trip?
We need to know.
And we need to know now.
Because, our past is too proud, our present is too troublesome and our future is too precarious to take any more chances. After eight disastrous years of Obamanism, we need a better, clearer idea of what our options are and where we may be going. We cannot afford to proceed on the basis of a whim, a smirk or somebody's personal head trip.
And, considering the alternative that we're facing, we need to know that our presumptive nominee is dead serious about vanquishing the plastic Queen of Guile who looms as a very ominous tomorrow. We need to know because it's abundantly clear that she really is serious about all this -- deadly serious, in the worst sense of that word.
The next few days and weeks should give us our answer about Donald J, Trump. The critical moments are upon us.
We're watching you, Mr. Trump. It's time to step up.
Are you serious about this? Do you really, really, really want it? Do you want it for the right reasons?
Are you willing to do what needs to be done to make it happen?
Because we are serious. We're paying attention. And we refuse to be jived.
Posted by Dan Cirucci at 4:09 PM