It's More Than A Shame, It's An Abomination! 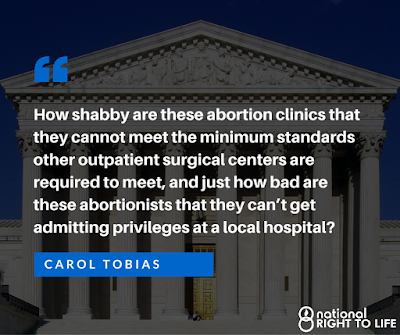 By a vote of 5-3, the U.S. Supreme Court today struck provisions of HB2, a Texas law requiring abortion clinics to meet the same standards as ambulatory surgical centers and requiring abortionists to have admitting privileges at a nearby hospital in case of medical emergencies (with certain exceptions.) The Fifth Circuit U.S. Court of Appeals previously rejected facial attacks on both provisions.

“How shabby are these abortion clinics that they cannot meet the minimum standards other outpatient surgical centers are required to meet, and just how bad are these abortionists that they can’t get admitting privileges at a local hospital?,” said Carol Tobias, president of National Right to Life. “As we saw with Kermit Gosnell in Philadelphia, it’s clear that the lucrative abortion industry is not able or willing to police itself and allows filthy, deplorable conditions to go unchecked.”

The provisions struck by the Court today were part of a broader pro-life omnibus package passed by the Texas legislature in 2013. Texas HB2 also included National Right to Life model language to protect unborn children who are capable of experiencing great pain when being killed by dismemberment or other late abortion methods. An unborn child is capable of feeling pain by 20 weeks after fertilization and earlier. That provision of the law was unchallenged in Whole Woman’s Health v. Hellerstedt.

“In the years following Roe v. Wade, the Court exhibited extreme hostility to regulation of abortion as a medical procedure,” said Tobias. “However, in its 1992 Casey decision, the Court turned a corner, rejecting the idea of it being ‘the country’s ex officio medical board’. Today, they reversed course and decided that they know better than representatives duly elected by the people of the United States.”

National Right to Life’s Brief of Amicus Curiae in the case is available here.
Posted by Dan Cirucci at 2:30 PM