In New Jersey, one of the most heavily-taxed states in the nation, the hue and cry is on again for a gas tax hike.

You didn't really expect this to go away, did you?
Democrats in the state need to deflect attention away from a new campaign (launched by the gannett newspapers in the state) to force action on the state's high property taxes.
So now, the Dem majority in the state's senate and Assembly have hatched a new shell game: Give us the extra money we needed for New Jersey's Transportation Fund (in fact give us more than that through a gas-tax hike) so that we can maintain roads and bridges and then we'll tackle property taxes.
Believe it: Behind close doors, legislative maneuvers are underway to hike New Jersey's tax on gas at the pump by as much as 15 or even 20 cents per gallon -- maybe even more!
And now, at least two GOP state senators are going along with a gas tax hike. Imagine! 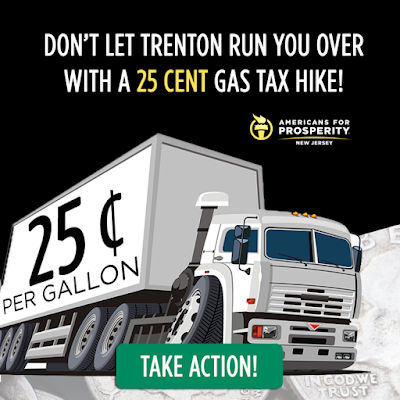 But, wait a minute.
This is our money that these supposed leaders are talking about behind closed doors.

Still, they figure if they raise the gas tax now (when gas prices are relatively low) we either won't notice or won't care.Get this: The people who run our state seem to think we're fools.Well, we're not. And here are Five Big Reasons NOT to raise the gas tax:

1) New Jersey already spends a whopping 8.4 times the national average for every mile of road it maintains or builds. North Dakota (which gets tons of snow) spends a fraction of what we spend per mile.
2) Our highway funding system is inefficient. Our state spent nearly $45,000 per every mile of roads on highway administration. The national average is just $10,500.
3) Other states with similarly dense metro areas and high costs of living spend far less per-mile than Jersey. Even New York and California spend less.
4) New Jersey has also made little use of public-private partnerships to finance and execute transportation projects. It's been reported that such projects are already lowering costs in 30 other states.
5) New Jersey’s has mishandled its transportation funding. The state should have spent annual budgeted money on a pay-as-you-go basis. But New Jersey inefficiently relied on debt to finance its roads and bridges.

On top of all this, New Jersey toll collections are through-the-roof. Our state is taking in more money from tolls than any other state except New York. What's happening to all this money?
Until New Jersey cleans up its transportation revenue and funding act, it will have to make do with the money it has.
Tell your state legislators: NO NJ GAS TAX HIKE!Here's what you can do to stop the gas tax hike. But you must act NOW!