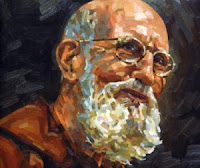 Saint John the Evangelist Parish in Center City Philadelphia will celebrate a Mass of Thanksgiving following the beatification of Father Solanus Casey, a Capuchin friar from Detroit, Michigan. Father Thomas Betz, O.F.M. Cap. will be the main celebrant. Father Casey is only the second man born in the United States to be beatified.

Background information on Father Solanus Casey
A member of the Capuchin Franciscan Order, Father Solanus Casey was born November 25, 1870 and died July 31, 1957. He entered the Capuchin Franciscan Order in 1897 and was ordained a priest in 1904. Due to his inability to fully complete all academic requirements for priesthood, he was never permitted to preach, hear confessions, or fulfill the usual pastoral work of Catholic priests. Instead, he was given the humble task of answering the door and talking to the many people who came to the Capuchin friaries in New York and Detroit where he was assigned.

Father Solanus became famous as a spiritual advisor and a man of prayer. During the Great Depression he founded a soup kitchen to feed the poor of Detroit and he was known for his pastoral visits to the sick. He said that he had two great loves: the sick and the poor. Many people received healings and other divine favors through his prayers. He spent 20 years in Detroit and it was there that he achieved his reputation for charity and holiness. People did not forget him after his death and devotion to his work and legacy continued.

Because of his holiness, Pope John Paul II declared him Venerable in 1995 and Pope Francis has announced that Father Solanus will be beatified at a Mass on November 18th at 4 p.m. at Ford Field, Detroit.

Background Information on Beatification Process
After Father Solanus received the title of Venerable from Pope John Paul II in 1995, people were then suggested to pray to Father Solanus, asking for his intercession to God. The Capuchins have documented hundreds of exceptional favors received which might be acclaimed as miraculous. Most of these claimed miracles did not have sufficient evidence to support the rigorous standards required for a Vatican declaration of miracle. However, one miracle was approved thus clearing the way for Father Solanus’ beatification. The case was of a woman who lives outside the United States and was visiting Father Solanus’ tomb while on a pilgrimage. The woman suffered from an incurable and painful skin disease. Her name has not been publicly released.

The woman started to pray for others while at the tomb in Detroit, but a voice in her head said, “pray for yourself.” The cure was instantaneous. The medical doctors in her home country, Detroit, and Rome all attested that there was no scientific explanation for the cure. Based on a thorough study of his life and virtues and in light of this approved miracle, Solanus Casey is acknowledged as one who is in heaven, in union with God, and is given the title of “Blessed.” The next step is to attain the title of Saint. Another miracle is required and it will have to be investigated and approved in the same manner as above to attain sainthood canonization.

Notes: Priests are welcome to concelebrate and if so should bring an alb and a white stole. For more information on the Mass, please contact Father Paul Brandt at 215-651-4454.
Posted by Dan Cirucci at 4:35 PM