How We Foresaw It All -- EIGHT Years Ago!

CBS News has announced that Jeff Glor will become the new anchorperson of the CBS Evening News.
Here's how it was announced:
But, if you had been paying attention to the Dan Cirucci Blog eight long years ago, you would have known that we determined that Jeff Glor was a rising star at CBS even then. Of course, we were tipped off by our ever-perceptive friend and TV expert Joanne Calabria who is Vice President for Public Affairs for the CBS Stations Group. Thanks to Joanne, we got to watch Jeff live and in person at the CBS studios in New York and we could see that he would be an anchorperson some day. In fact, he was already prepping for the role.
Here's what we wrote on June 18, 2009 under the headline 'Emerging Star, Jeff Glor':
Ever hear of Jeff Glor?

If you haven't you soon will.
More on Jeff in a moment.
But let me begin by telling you about our amazing day in Manhattan with PR colleagues earlier this week.
We began in Philly at The Bellevue on Broad Street where a bunch of us boarded a mini bus for NYC.
Once in the Big Apple we lunched at Artisanal Restaurant on Park Avenue with Linda Ayares, Senior Vice President of M. Silver Associates specializing in tourism and travel PR and marketing. Linda 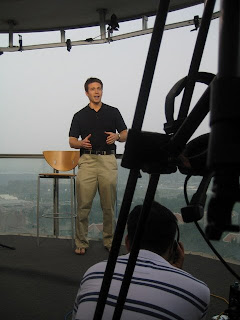 regaled us with wonderful PR crisis stories and gave us incredible insight into building relationships with clients and helping clients navigate their way through some of the most harrowing public relations dilemmas imaginable.
Then, we were off to Peppercom Strategic Communications where we heard from Ted Birkhahn, Chief Operating Officer and Head of Client Services. Ted spoke about digital marketing and the emerging importance of social media in monitoring the media and customer landscape and spotting trends and developments for clients.
"It's all about customer insights," Ted said. Ted was joined by Sam Ford, Peppercom's Director of Consumer Insights who also gave us his own insights into how, when and why to use digital media (Twitter, blogs, Facebook, etc.) to gain information that is often better (and cheaper to acquire) than a focus group.
Ted and Sam know a thing or two about marketing and communications. Ted worked for Rudy Giuliani's media team when Rudy was Mayor of New York and Sam project manager for the MIT's Convergence Culture Consortium
After Peppercom we were whisked uptown to the CBS Broadcast Center where we met our friend Joanne Calabria for a private look inside the CBS Evening News.
And that's where Jeff Glor comes in.
Katie Couric wasn't anchoring the News on Tuesday evening. She was off and was replaced by Saturday News anchor Jeff Glor.
Jeff is sort of CBS-TV's answer to Anderson Cooper.
At 33, Jeff is one of the rising stars in the TV news business. He's a CBS national affairs reporter and is also seen on the CBS Early Show.
Remarkably telegenic and calm with a friendly, dispassionate manner he is a trained journalist and experienced reporter and acnhorperson who delivers the news with an enviable sense of professionalism.
We know this because we watched the Evening News being prepared and we saw Jeff and his colleagues in action. We were in the editing rooms as the broadcast was constructed and in the control room once the program began to air. We saw CBS and the Evening News in a way that very few people see it: from the inside, out.
After the program aired we heard from CBS Evening News Executive Producer Rick Kaplan who told us that "these are serious times and people expect a serious, reliable news broadcast." Kaplan added: "They don't want fluff. People are worried about their livelihood, their world, their families and their future. They expect us to deliver the news seriously, fairly, honestly."
Following the CBS session we all relaxed at Brasserie 8½ on 57th St. where many CBS staffers chill after a long day at the Broadcast Center.
Then, it was goodbye to Manhattan and back to Philly.
What a wonderful day!
BTW: The entire day was coordinated by the incredible Lisa Simon, President of Simon Public Relations Group in Philadelphia. Thanks, Lisa!
Posted by Dan Cirucci at 7:22 PM