What's The Story On THIS Guy? He Ain't Tellin!

To date, Phil Murphy has spent nearly $20 million of personal funds to fuel his campaign for New Jersey governor. But with 11 days to go until Election Day, New Jersey voters know remarkably little about how Phil Murphy actually made his fortune.

During an editorial board interview with the Asbury Park Press, Phil Murphy was asked, “I’ve heard various reports about how wealthy you are… How wealthy are you? Where exactly did it come from?” Murphy declined to answer, saying, “I’ve made a few bucks, there's no question about it,” before pivoting to other topics. 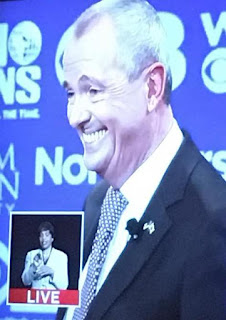 “Serious questions remain about how exactly Phil Murphy made his massive fortune, and New Jerseyans deserve to know before they head to the polls,” said Kim Guadagno. “Perhaps Phil Murphy won’t release his tax returns because he doesn’t want us to know if he profited off gun companies or helped raise capital for North Korea’s primary supplier of fuel while working at Goldman Sachs. In the name of transparency, Phil Murphy should immediately release his tax returns with a full list of clients and business deals he was involved in at Goldman Sachs.”

Murphy was also attacked by his fellow Democrats during his primary election for flip flopping on the environment because of his extensive investments in energy and fracking companies. (Bergen Record, 5/15/2017)

Murphy has repeatedly refused to make his tax returns publicly available online to avoid close scrutiny of his investments and business dealings before the election.
Posted by Dan Cirucci at 7:39 PM