He's An Obstructionist And A 'Disaster'!

Pennsylvania Republicans and health care professionals Friday expressed concern over U.S. Senator Bob Casey’s healthcare record, arguing his support for Medicaid expansion and Obamacare is a slippery slope toward socialized medicine.
“Bob Casey’s record on healthcare and his silence on the increasingly socialist movement of his Party’s stance on the issue should give Pennsylvanians pause as they consider who to vote for in November,” said Republican Party of Pennsylvania Chairman Val DiGiorgio. 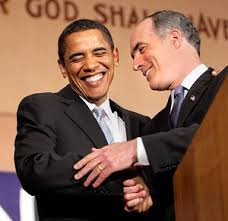 “Bob Casey’s support of Medicaid expansion and Obamacare—which has seen Pennsylvania premiums increase by 120 percent—show he is comfortable with joining the leftward tilt of his Party toward supporting policies like single-payer healthcare or Medicare for all.”
Congressman Lou Barletta, who is opposing Sen. Casey in the November General Election, has voted to support repealing Obamacare while also working to support protections for those with pre-existing conditions.
He has also support pro-growth policies like the Tax Cuts and Jobs Act, which Bob Casey has continually obstructed.
“Bob Casey has left moderate Pennsylvanians behind with his support for Obamacare and his opposition and obstruction when it comes to putting more money in the pockets of average Pennsylvania families. He may represent the liberal views of Massachusetts or California, but he is a disaster for the people of Pennsylvania,” said Luzerne County Republican Committee Chairman Ron Ferrance.
“We need Lou Barletta in the U.S. Senate so we can be assured of having someone that will support policies that will keep this economy moving, respect taxpayer dollars, and stop the growth of socialized medicine.”
Frank Polidora, a Hazleton-based retired Orthopedic surgeon, argued that socialized medicine would be a disaster for the people of Pennsylvania.
“The people I treated over my career were left behind by government run healthcare programs that limit access to care and provide physicians with little flexibility in treating their patients. Bob Casey has had two terms to help fix the system, but under his watch, it has only gotten worse.
“Creating additional bureaucracy through socialized medicine would not only be a taxpayer burden, but would be a catastrophe for patients across the commonwealth and the United States.”
Posted by Dan Cirucci at 4:48 PM