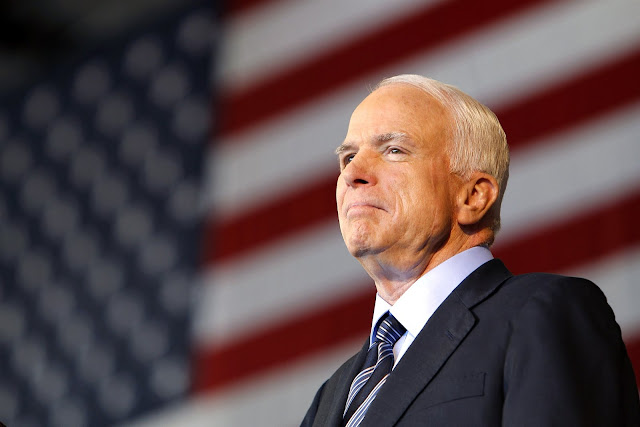 We were proud to have supported John McCain during his career.
We stood by him and championed his cause during the long 2008 presidential campaign. If you've followed this blog, this is not news to you. We contributed to McCain, we rallied with him and we sang his praises here over and over again.
We honored him as a revered military hero and a patriot and we were deeply disappointed when the voters rejected him at the polls in 2008.
John McCain fought a valiant fight -- then and now. Always, he was an American original -- a ruggedly individualistic leader who followed his own drummer. He delighted some, confounded others and often defied expectations. But always, he commanded respect.
We can think of no better way to remember him tonight than by reprinting something we wrote just after the 2008 election -- something that we like to think is very much in the spirit of McCain himself:

Even before the election was over people were accusing me of being in denial.For whatever reason, they wanted me to recognize the reality of the situation.Friends urged me to "get real" and prepare myself so that I'd be OK "after the fall."Those on the other side wanted me to acknowledge the rightness of their cause and the inevitability of their victory. In their bravado, they craved affirmation (and they still do). But I took it as an attempt to disarm me and quickly brushed it aside.What they didn't know was I never needed a wake up call because I wasn't in denial.I knew the odds were long. I knew the road would be difficult. Hey, I supported McGovern in 1972. I know what it's like to be up against long odds. And I lived through that. I survived.I recognized that after the stock market collapsed and economic chaos took over it would be hard for the GOP to snatch victory from the jaws of defeat.I wasn't in denial.But I simply decided to find bright patches of optimism and cause for (dare I say it) hope where I could. I found bits of sunlight in every cloud on the horizon. I needed to do that (all of of us on this side needed to do it) to get from there to here. We needed to do this for ourselves - and for our country.And we needed to do it to stay in the fight. We weren't about to give the others any more cause for celebration than they already had.When it comes to fighting against long odds, this is the only way I know.And I have no respect for those who threw in the towel before the battle was over or who (worse yet) defected. Those cowards (and the ton of them shall remain nameless) know who they are. And they will have to live with themselves.I'm a big boy. I've been through this before. I can live with it.I sailed proudly with a gutsy, courageous, salty old sailor. We weren't always a perfect match and he sure as hell wasn't my first choice. But it was still a helluva ride.So, no regrets.No recriminations. No apologies. Now, let's begin the new day.