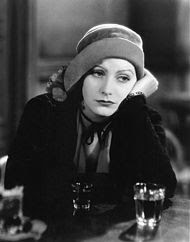 She wasn't particularly shapely.
She was too tall, flat-chested, had big feet and not much of a derriere.
You'd hardly call her a sex symbol.
But she was mysterious and intriguing and once the lights and the cameras were turned on, she became luminescent. She literally lit up the screen.
Her face is, quite simply, the greatest face Hollywood has ever know. The eyes, the lips, the nose, the bone structure, the expressiveness -- all proved captivating. She could present a completely Sphinx-like, blank face one minute and appear anguished or tortured or puzzled or pensive or studious or even delighted the next minute.
Last night we watched her in a silent film called The Kiss and (like her then very young co-star Lew Ayers) we couldn't take our eyes off her.
And once she finally spoke up in her first talkie (Anna Christie) the voice matched the face of this beguiling seductress. It was everything audiences had expected, and more. When she finally burst into full-fledged  laugher in Ninotchka, the whole world laughed with her.
Though she's been dead for nearly 30 years, her image, her life, her films (and her decades alone and out of the public eye) continue to fascinate.
She was The Face, The Look, the very definition of cinematic beauty.
She remains, Greta Garbo!
Posted by Dan Cirucci at 1:33 PM